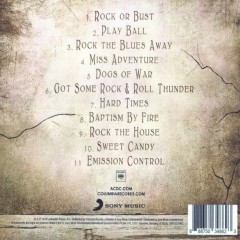 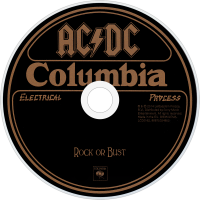 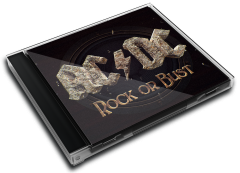 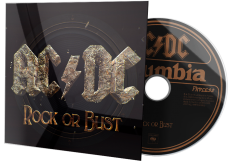 The group released the debut single from the album, titled "Play Ball", on 7 October 2014. The song has been a commercial success, reaching the top 40 charts in various nations such as France (at #39) and Switzerland (at #19).
Due to be released on 28 November 2014 in Australia and on 2 December 2014 elsewhere, Rock or Bust will mark the band's first original recordings since 2008's Black Ice.

Rock or Bust will be the band's first album without founding member and rhythm guitarist Malcolm Young, who left the band in 2014 for health reasons. Malcolm's departure was later clarified by the band and their management, saying that Malcolm was officially diagnosed with dementia and will possibly never play again.

Before the album was officially announced, Brian Johnson admitted that it was difficult to make the album without Malcolm Young. He brought about the idea that the album could be called Man Down, but believed the title felt too negative towards Malcolm's situation and overall health.

On 6 November 2014, drummer Phil Rudd was arrested for attempting to procure the murder of two men. AC/DC made a statement the same day: "We've only become aware of Phil's arrest as the news was breaking. We have no further comment. Phil's absence will not affect the release of our new album Rock or Bust and upcoming tour next year." It is not yet clear whether Rudd will remain with the band or not, or who might be his replacement. The attempted procurement charge against Rudd was dropped the following day; charges of possession of methamphetamine and possession of cannabis and a charge of threatening to kill remained.

User Album Review
Forty years after AC/DC's formation, nothing fundamental is about to change; it would therefore be possible to form an opinion on their record regardless of whether or not you actually had the chance to listen to it beforehand. And this is quite handy when their label are about as useful as a chocolate teapot when it comes to providing pre-release copies for appraisal. So, in spite of U2 related shenanigans, hoorah for Apple's iTunes, and their occasional pre-release streams.

With founding member and rhythm guitarist Malcolm Young departing the band for health reasons earlier this year, Rock Or Bust will become the first ever internationally released studio album to not feature both Young brothers. Step forward nephew Stevie to keep the family numbers consistent for their 15th such effort. But Malcolm's absence does not mean a complete lack of contribution from him as the oldest schoolboy in the world, Angus, plundered past scraps of material laid down by the brothers for much of the work collated for the new album.

And band troubles have not only been caused by age, with arrested drummer Phil Rudd facing a number of charges - some of which were soon dropped - no doubt leaving a question mark over his appearance on the planned 40th anniversary tour next year.

The album itself will have been preceded by a couple of singles. The first will be a typically energetic fist-pumper featuring guitaring that recalls many other tracks by the Australian rockers yet somehow still sound fresh, being named something "balls-out" rock-ish like Play Ball. The title track will be another single - maybe a bit of a slower, riff-heavy effort that will again sound remarkably recycled guitar-wise with a tired sounding chorus but Brian Johnson's vocals will elevate it by still sounding remarkably similar to how they sounded back in 1980 when he picked up the mic following Bon Scott's tragic death. An accompanying video will be shot with 500 lucky fans participating in a London shoot too - and for those lucky few, the quality of the song won't matter at all.

Elsewhere, the album will feature a truck-load of more recycled main riffs, more screeching vocals, more thumping bass lines and more extravagant bursts of guitar soloing courtesy of the one in cap, shorts and tie. A track perfect for a video game or action film soundtrack is guaranteed to appear; it'll be called something like Soldier Of Fortune and contain references to dogs of war - or vice-versa - and will feature thumping percussion, driving rhythm and menacing growl of a repeated backing vocal.

There will also be the odd staple foot-tapper destined for a live workout. They'll have other rock and roll referencing titles like Got Some Rock & Roll Thunder. Sex will also find an obligatory inclusion in some form, probably more than once. These ones will be named something appropriate in case anyone needs a helping hand to relieve their frustration in identifying them too, like Sweet Candy for instance. It'll be a tale likely to give a good hard wink in the direction of an unbelievably flexible pole dancer, spurting lyrics forth like "make the boys go wild" and "slides down a pole"...pure smut of course. Or perhaps it'll appear under a clever name like Miss Adventure and hit you with cock-teasing lyrics like "feel the juice" and "make you stand up and proud".

Sometimes the riffs will even recall other rock acts too, like Led Zeppelin for example; perhaps one of these will appear in a song penetrated by a shouted "rock the house" cry which will also probably double up as the song title as well.

And maybe if you're really lucky there will be a biggie - not on the scale of Back In Black, Highway To Hell or even Thunderstruck but it'll still be an outstandingly feel-good anthem called Rock The Blues Away, maybe. "Up all night and day," Johnson will sing; whilst this is unlikely without blue pill assistance at their age, it'll sure as hell help you keep it up through the night and isn't that what AC/DC's brand of rock is all about?

All in all, it'll be a rollicking great ride. But you already knew that. You might feel like you've heard it all before, and you probably have, but it'll still rock. In this case, it really matters not that the album wasn't put forward for scrutiny prior to release. Because those that buy it are pre-defined. With AC/DC, what you see is what you get. Just this once, we wouldn't have it any other way.