Track Description
"Touch" is a song by British girl group Little Mix. It was released as the second single from their studio album Glory Days. "Touch" reached the top ten in the United Kingdom and Ireland. A remixed version, featuring newly-recorded vocals from American rapper Kid Ink, was released on 28 February 2017. The remix of the song is included on Glory Days: The Platinum Edition. The song was nominated for British Single of the Year and Best British Video of the Year at the 2018 Brit Awards.

Background
Preceding the release of Glory Days, "Touch" was released as the fourth promotional single on 15 November 2016. On 5 December 2016, Little Mix announced that the song would become their second single from the album. On 28 February 2017, a remix featuring Kid Ink was also made available.

Composition and critical reception
"Touch" is a dance-pop and tropical house song. The song has been described a "club anthem" by several critics. Lewis Corner from Digital Spy gave a positive review for the song, describing it as "more than ready for the dancefloor with dancehall vibes, bouncy beats and an infectious chorus that's enough to take over the whole of your body."

Chart performance
Before being released as the second single the song debuted at number 62 on the UK Singles Chart on 25 November 2016. The song re-entered the chart on 16 December 2016, following their performance of the single on The X Factor final, charting at number 23. The following week the song rose nineteen places to number four, where it stayed for three weeks. On 13 January 2017, the song fell one place to number five. The song marks the group's tenth top 10 single in the United Kingdom.

Music video
The music video was released to Little Mix's YouTube account on 19 January 2017. The video was directed by Director X and Paris Goebel. The video takes place at a colourful maze, where the girls perform choreography with their male dancers. As of 16 January 2018, "Touch" has received over 230 million views.

Reception
Zoe Briggs from OK! magazine commented: "Sending social media into a total meltdown with the music release, Little Mix fans are happy to see The X Factor winners doing what they do best. However, after being labelled as one of their sexiest music videos yet, Perrie Edwards has continued to cause controversy with her fashion choices." Glamour praised the video: "Perrie, Jesy, Leigh Anne and Jade can all be seen showing off some pretty excellent dance moves as they are joined with a load of hot banking dancers. It's a tough job, eh girls?"

Live performances
The song was performed as a medley with "Oops", featuring Charlie Puth, on 11 December 2016 on The X Factor UK to coincide with the fifth anniversary of Little Mix winning the show. The band started off by performing the intro of the acoustic version of the song before switching to the original version of the song for the chorus. Little Mix performed "Touch" at the Today Show in the US on February 28, 2017 and on The Late Late Show with James Corden on March 28, 2017. The group performed the song with modified lyrics at the 2017 Kids' Choice Awards as a medley with their song "Shout Out to My Ex" on 11 March 2017. The song was part of Little Mix's setlist whilst supporting Ariana Grande on the North American leg of her Dangerous Woman Tour. "Touch" was a regular part of the setlist for the band's Glory Days Tour. 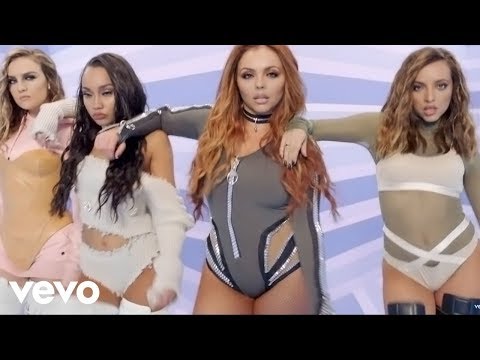