"Sing" is a song by English singer-songwriter Ed Sheeran. It was written by Sheeran and Pharrell Williams, who also produced it and provides uncredited background vocals. The song was released as a digital download on 7 April 2014, serving as the lead single from Sheeran's second studio album, x (2014).

Three years after the release of his debut album, +, Sheeran announced that he hoped he would release his second album during 2014. The song was written by Sheeran and Pharrell Williams, produced by the latter, and has a length of 3 minutes and 55 seconds. The song, which has pop and R&B influences and was inspired by singer Justin Timberlake, is a considered a departure from Sheeran's folk rock sound he became known for on his album +. Sheeran was inspired to model the song after the pop and R&B stylings of Timberlake, stating "It was pretty close to a direct inspiration. I love Justified and FutureSex/LoveSounds, so I took inspiration from those." The lyrics are about "a night out in Vegas."

"Sing" was released in the United Kingdom, Ireland, Australia and Germany in May 2014 with a corresponding EP. Aside from these nations, "Sing" was released internationally on 7 April 2014, during a YouTube live chat with Sheeran. "Friends", a track from the EP, entered the UK Singles Chart at number 121.

The music video for "Sing", directed by Emil Nava, was released exclusively to Sheeran's Facebook page on 22 May 2014, and added to Vevo and YouTube on 23 May, exactly a month before the album was released. It follows a puppet caricature of Sheeran on a night out, during which he gets drunk, sings karaoke, goes to a strip club and picks up Sheeran and Pharrell from a studio in his truck.

The puppet is currently in Sheeran's safekeeping, but he has "no idea how to work it yet". The puppet was closely modelled on him, down to his clothes and tattoos. Sheeran and Pharrell received the award for Best Male Video at the 2014 MTV Video Music Awards for the video. 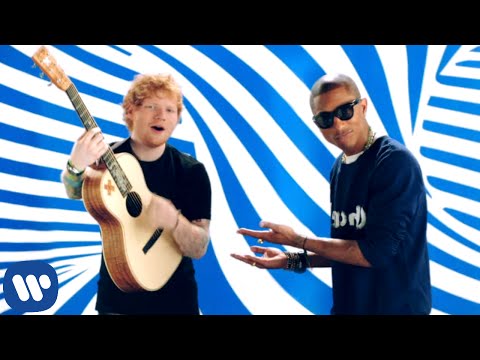