"Jailhouse Rock" is a song written by Jerry Leiber and Mike Stoller that first became a hit for Elvis Presley. The song was released as a 45rpm single on September 24, 1957, to coincide with the release of Presley's motion picture, Jailhouse Rock.

The song as recorded by Presley is #67 on Rolling Stone's list of The 500 Greatest Songs of All Time and was named one of The Rock and Roll Hall of Fame's 500 Songs that Shaped Rock and Roll. In 2004, it finished at #21 on AFI's 100 Years...100 Songs survey of top tunes in American cinema. On 27 November 2016, the Grammy Hall of Fame announced its induction, along with that of another 24 songs.

Presley's performance of the song in the film, choreographed as a dance routine involving himself and a large group of male prisoners, was featured among other classic MGM musical numbers in the 1994 documentary That's Entertainment! III. The film version differs from the single version of the song, featuring backing instrumentation and vocals not heard on the record.

Some of the characters named in the song are real people. Shifty Henry was a well-known LA musician, not a criminal. The Purple Gang was a real mob. "Sad Sack" was a U.S. Army nickname in World War II for a loser, which also became the name of a popular comic strip and comic book character.

According to Rolling Stone, Leiber and Stoller's "theme song for Presley's third movie was decidedly silly, the kind of tongue-in-cheek goof they had come up with for The Coasters. The King, however, sang it as straight rock & roll, overlooking the jokes in the lyrics (like the suggestion of gay romance when inmate Number 47 tells Number 3, 'You're the cutest jailbird I ever did see') and then introducing Scotty Moore's guitar solo with a cry so intense that the take almost collapses." Gender studies scholars cite the song for "its famous reference to homoerotics behind bars," while music critic Garry Mulholland writes, "'Jailhouse Rock' was always a queer lyric, in both senses." Douglas Brode writes of the filmed production number that it's "amazing that the sequence passed by the censors". 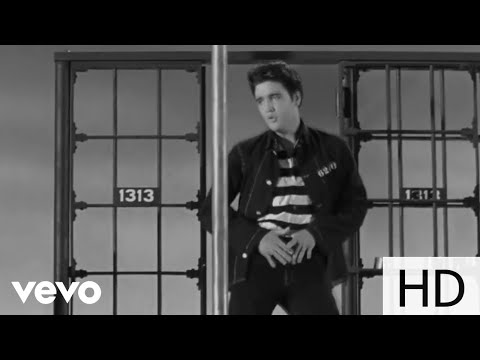