"I Was Here" is a song recorded by American R&B recording artist Beyoncé Knowles from her fourth studio album, 4 (2011). It was written by Diane Warren, while production was handled by Ryan Tedder, Brent Kutzle, and Kuk Harrell; Knowles is credited on the vocal production. "I Was Here" is a reflective R&B and New Age ballad, in which Knowles vulnerably reviews her past, wanting to leave an impact on the world before her life comes to an end. Described as a "career song" by Warren, its development was motivated by the September 11 attacks in the United States.

"I Was Here" garnered mixed to positive reviews from music critics, most of whom criticized the song's inclusion on the track-listing of the album and expressed discomfort about Knowles worrying about her legacy and wanting to leave an impact on the world, given that she was still below thirty years. Critics, nevertheless, favored Knowles' vocal performance on the song, which is complemented by piano keys and heavy drum beats. Following the release of 4, "I Was Here" charted at number 131 on the UK Singles Chart, 74 on the Swiss Singles Chart, and 44 on the South Korea Gaon International Singles Chart in early July 2011. Later, in 2012, the song also appeared on several charts internationally.

A music video for the song, directed by Sophie Muller, was released on August 19, 2012 and it features Knowles performing the song live at the United Nations General Assembly while images of volunteers doing humanitarian work were projected on the screen behind her. It was donated to the World Humanitarian Day and aimed to create social media history with one billion people sharing the message of doing something good for another person. Upon its release, it received positive reviews from music critics who praised the projections, Knowles' vocal performance and her look. In late July, the song was included on the soundtrack for the 2011 FIFA Women's World Cup Final. "I Was Here" was also part of Knowles' set list for her revue 4 Intimate Nights with Beyoncé and was used in the Revel Presents: Beyoncé Live shows during an interlude. The live video from the DVD Live at Roseland: Elements of 4 appeared online on November 16, 2011 containing Knowles' home movies and professional highlights. "I Was Here" was covered by Lea Michele for Glee's soundtrack album Glee: The Music, The Graduation Album (2012). 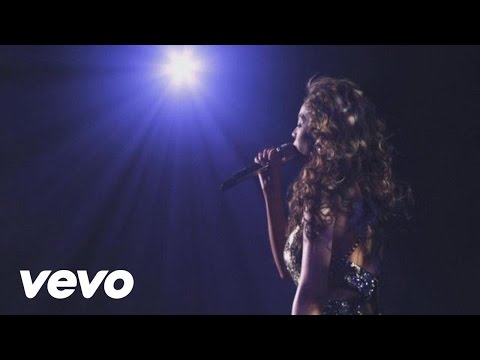