Track Description
"House of Fun" is a song by English ska/pop group Madness, credited to Mike Barson and Lee Thompson. It was released as a one-off single on 14 May 1982 and reached number one in the UK Singles Chart, spending nine weeks in the charts. The song was re-released in 1992, reaching number 40. It is the band's only number one single in the UK and in 2015 the British public voted it as the nation's 8th favourite 1980s number one in a poll for ITV.

However, at this point, the song was already recorded, and the management decided not to re-record the whole song. Instead, the recording was edited, and the chorus instruments and vocals dubbed onto the recording. This proved to be difficult, mainly due to technical limitations at the time, and it resulted in the first part of the word "Welcome" being cut off. Due to this, the chorus seemed to begin "Elcome to the House of Fun", so lead singer Suggs was forced to overdub the word "Welcome". Although this proved to be a tough task, it was completed successfully.

"House of Fun" is composed in the key of D, written in common time. It is a pop song which moves at an upbeat 126 beats per minute. The song is written in simple verse-chorus form, ending with a repeating chorus fade out (the original 7" release version/mix ends with a sudden keyboard "crash", followed by fairground organ music). The song begins solely with eight drum beats, before the keyboard, bass guitar, electric guitar, trumpet and saxophone are all introduced simultaneously.

The song is about coming of age. The lyrics tell the story of a boy on his 16th birthday attempting to buy condoms at a chemist. The UK age of consent is 16, and he makes a point of stating that he is "16 today and up for fun". However, the boy is misunderstood by the chemist, as he asks for the condoms using slang euphemisms, such as "box of balloons with a featherlight touch" and "party hats with the coloured tips". The confused chemist behind the counter eventually informs the boy that the establishment is not a joke shop, and directs him towards the "House of Fun".

I'm not sure about this one... I think it's about coming of age, I can't remember much about because when it happened to me it was a long time ago. You could buy a packet of fags, a pint of beer and a three piece suit for half a crown and still have enough left to go and see Rudolf Valentino at the Gaumont! I can't afford to go to the pictures these days but I hear they talk in them now.

A substantial portion of the music video was filmed at the Pleasure Beach in Great Yarmouth, with parts of the video featuring the band on the Roller Coaster. This was filmed on 7 March 1982. The video begins with Suggs dressed as a boy entering the shop with Lee Thompson and Chas Smash behind him, playing the saxophone and trumpet respectively. On entering the shop, Suggs acts out the lyrics of the song, as a 16-year-old boy awkwardly attempting to purchase condoms, without much success. Suddenly, on the first chorus, three of the band members enter the shop, dressed in gowns and wearing sunglasses and silly headgear, and perform a simple, rhythmic yet comedic tongue-in-cheek stepping-dance routine, supposedly acting as dancing clowns hired with the Pleasure Beach attraction "Fun House".

The band are later seen in a barbershop, before the finale of the song is sung on the roller coaster at the aforementioned funfair. The film closes with the band on board an infinite roller coaster loop as the chorus fades.

Despite the fact that "House of Fun" was not released in the US, the music video was shown on the newly launched MTV. Due to this, the music video, along with others such as "It Must Be Love" and "Cardiac Arrest", helped set the stage in the US for Madness' future song "Our House", which was their biggest stateside hit by far, peaking at number 7 in May 1983. 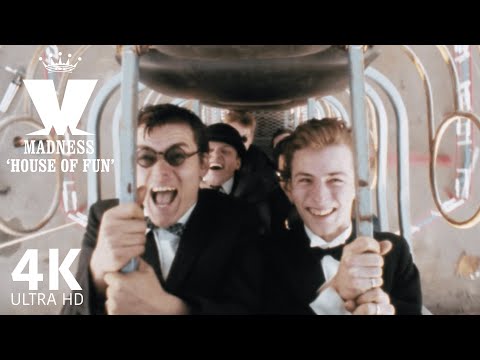