"Almost Easy" is a song by Avenged Sevenfold. It is the second song as well as second single from their self-titled album.

The song first premiered at a concert in Indonesia during Avenged Sevenfold's 2007 Southeast Asian Tour. The song was officially released on September 18, 2007 through online music stores such as iTunes,

The song was written by the band's drummer, Jimmy "The Rev" Sullivan. In the second chorus the whole band sang simultaneously - all 5 members combined their voices for more of a choir sound, which was shown in the MVI that came along with their self-titled album.

The song was included on Transformers: Revenge of the Fallen soundtrack. It was originally planned to be on the 2007 Transformers soundtrack; however, it was not finished in time.

In December 2008 it was announced that the USC Trojan Marching Band would perform the song at the Rose Bowl halftime show on January 1, 2009.

The video shows the band playing on a barren wasteland whilst they appear to be aflame. Over a ridge, a huge crowd of hundreds of people appear, walking in a zombie-like fashion towards the band, only to stop at a large gaping hole and jump downwards, into what appears to be Hell. Special effects show some parts where the people have skulls for faces.

At the end of the video, when the last person jumps down the cavern, the camera zooms out from the band, showing that the hole the people were jumping into was actually the eye of the bands recognizable logo from the Avenged Sevenfold album cover, the "Deathbat". The band stated in an interview with Fuse host Steven Smith on Steven's Untitled Rock Show that the inspiration for the video came from a Wendy's commercial they saw in Asia in which a large crowd is running toward the same hamburger.

M. Shadows then said "wouldn't it be cool if we (Avenged Sevenfold) were playing in a fiery blaze and a bunch of people were running towards us" an idea that eventually became the video. As of April 2013, it has 14,418,964 views on YouTube. 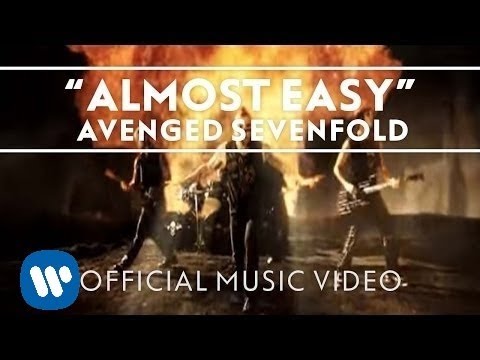