"The Fly" is a song by Irish rock band U2. It is the seventh track from their 1991 album, Achtung Baby, and it was released as the album's first single on 21 October 1991. "The Fly" introduced a more abrasive-sounding U2, as the song featured danceable hip-hop beats, industrial textures, distorted vocals, and an elaborate guitar solo. Lead vocalist Bono described the song as "the sound of four men chopping down The Joshua Tree", due to its departure from the traditional sound that had characterised the band in the 1980s.

Bono described the song's subject as that of a phone call from someone in Hell who enjoys being there and telling the person on the other end of the line what he has learned. The lyrics are written as a series of aphorisms that Bono collected during the album's recording. The song and its video were also a showcase for "The Fly", a persona that Bono adopted for the Zoo TV Tour, in which he played the part of a stereotypical leather-clad rock star known for wearing large wrap-around sunglasses and strutting around the stage. The song became the band's second number-one single in the UK and was successful among alternative rock radio audiences.

Recording and production
The writing of "The Fly" began during recording sessions for Achtung Baby at Berlin's Hansa Studios in 1990. The song's origins can be traced to a demo recorded there, which eventually evolved into the B-side "Lady with the Spinning Head". The demo was among the material that was bootlegged from the Berlin sessions and released as Salome: The Axtung Beibi Sessions. In 1991, the album's recording sessions moved to the seaside mansion "Elsinore" in Dalkey, where the group continued to work on the demo. It was troublesome, but it inspired portions of three separate songs, "The Fly" being one of them, and "Ultraviolet (Light My Way)" and "Zoo Station" being the other two. Lead vocalist Bono stated, "One day, Flood had a different look in his eye. It started to feel good. We recorded 'The Fly'. Edge's guitar sound was literally like a fly had broken into your brain and was buzzing around."

While recording the song, Bono devised a persona he called "The Fly", and it is from this character's perspective that he wrote the lyrics. He recalled that during the recording sessions, Fintan Fitzgerald, in charge of the band's wardrobe, found a 1970s pair of wraparound blaxploitation sunglasses. Bono would put them on and make everyone laugh whenever they faced a problem or disagreement. He recalls, "I became very interested in these single-line aphorisms. I had been writing them, so I got this character who could say them all, from 'A liar won't believe anybody else' to 'A friend is someone who lets you down,' and that's where 'The Fly' was coming from."

Towards the end of the sessions, U2 were unhappy with the mix of "The Fly", which was selected well in advance of the album's release to be the first single. The band ended up taking the song's mix, placing it on a two-inch multi-track tape, and adding additional vocals and guitars. The Edge and producer Daniel Lanois mixed on top of the previous mix live in the studio, an unusual practice. The Edge says the technique would "make studio professionals laugh" and believes "part of the reason why sounds so dynamic is because it was a real hands-on performance mix." The guitar sounds in the opening were created by mixing additional guitar on top of the existing guitar, creating a "really crazy natural phasing effect".

Bassist Adam Clayton mentioned that "at that time, it was impossible to know whether U2 fans would follow Bono down this particular path, so was a real leap of faith. The whole track is a high-energy sonic barrage but with an angelic chorus. It's a classic example of U2 and Eno interfacing."

Composition
"The Fly" is played at a tempo of 108 beats per minute in a 4/4 time signature in the key of E major. The verses follow a chord progression of E–A–Asus4–E. The chorus follows a chord progression of C♯m-E-A. When played live, however, the song is usually played a semitone lower, with the guitar in E♭ tuning, a common technique used by U2 when playing live.

Lyrically, Bono described the song as "a crank call from Hell... but likes it there." The caller is Bono's eponymous character, telling the listener what he learned in Hell. Bono sings part of the chorus in a falsetto, utilising what he calls the "Fat Lady" voice, which he also uses on the songs "Lemon" and "Numb". 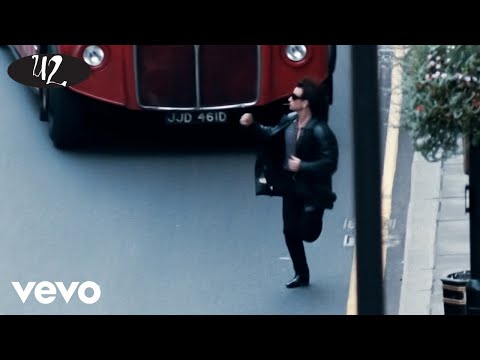