Where the Streets Have No Name

"Where the Streets Have No Name" is a song by Irish rock band U2. It is the opening track from their 1987 album The Joshua Tree and was released as the album's third single in August 1987. The song's hook is a repeating guitar arpeggio using a delay effect, played during the song's introduction and again at the end. Lead vocalist Bono wrote the lyrics in response to the notion that it is possible to identify a person's religion and income based on the street on which they lived, particularly in Belfast. During the band's difficulties recording the song, producer Brian Eno considered erasing the song's tapes to have them start from scratch.

"Where the Streets Have No Name" was praised by critics and became a commercial success, peaking at number thirteen in the US, number fourteen in Canada, number ten in the Netherlands, and number four in the United Kingdom. The song has become one of the band's most popular songs and has remained a staple of their live act since the song debuted in 1987 on The Joshua Tree Tour. The song was notably performed on a Los Angeles rooftop for the filming of its music video, which won a Grammy Award for Best Performance Music Video. Recently, the song has been used by the NFL's Baltimore Ravens as their entrance song in Super Bowl XLVII. It has also been used by the NHL's Vancouver Canucks as their entrance song in the Stanley Cup Playoffs.
The music for "Where the Streets Have No Name" originated from a demo that guitarist The Edge composed the night before the group resumed The Joshua Tree sessions. In an upstairs room at Melbeach House—his newly purchased home—The Edge used a four-track tape machine to record an arrangement of keyboards, bass, guitar, and a drum machine. Realising that the album sessions were approaching the end and that the band were short on exceptional live songs, The Edge wanted to "conjure up the ultimate U2 live-song", so he imagined what he would like to hear at a future U2 show if he were a fan. After finishing the rough mix, he felt he had come up with "the most amazing guitar part and song of life". With no one in the house to share the demo with, The Edge recalls dancing around and punching the air in celebration.

Although the band liked the demo, it was difficult for them to record the song. Bassist Adam Clayton said, "At the time it sounded like a foreign language, whereas now we understand how it works". The arrangement, with two time signature shifts and frequent chord changes, was rehearsed many times, but the group struggled to get a performance they liked. According to co-producer Daniel Lanois, "that was the science project song. I remember having this massive schoolhouse blackboard, as we call them. I was holding a pointer, like a college professor, walking the band through the chord changes like a fucking nerd. It was ridiculous." Co-producer Brian Eno estimates that half of the album sessions were spent trying to record a suitable version of "Where the Streets Have No Name". The band worked on a single take for weeks, but as Eno explained, that particular version had a lot of problems with it and the group continued trying to fix it up. Through all of their work, they had gradually replaced each instrument take until nothing remained from the original performance.

So much time had been spent on "screwdriver work" that Eno thought it would be best to start from scratch. His idea was to "stage an accident" and have the song's tapes erased. He said that this was not to force abandonment of the song, but rather that it would be more effective to start again with a fresh performance. At one point, Eno had the tapes cued up and ready to be recorded over, but this erasure never took place; according to engineer Flood, fellow engineer Pat McCarthy returned to the control room and upon seeing Eno ready to erase the tapes, dropped the tray of tea he was carrying and physically restrained Eno.

The studio version of the song was compiled from several different takes. It was one of several songs mixed by Steve Lillywhite in the final months of recording The Joshua Tree. Drummer Larry Mullen, Jr. later said of the song, "It took so long to get that song right, it was difficult for us to make any sense of it. It only became a truly great song through playing live. On the record, musically, it's not half the song it is live."

Lead vocalist Bono wrote the lyrics while on a humanitarian visit to Ethiopia with his wife, Ali Hewson. He first wrote down the lyrics on an airsickness bag while staying in a village.
The video begins with an aerial shot of a block in Los Angeles, and clips of radio broadcasts are heard with disc jockeys stating that U2 is planning on performing a concert downtown and expecting crowds of 30,000 people. Police show up to the set and inform the band's crew of the security issue that the film shoot is causing, due to the large number of people who are coming to watch the performance. Two minutes into the video, U2 are seen on the roof of a liquor store and perform "Where the Streets Have No Name" to a large crowd of people standing in the streets surrounding the building. Towards the end of the song, the police tell the crew that the performance is about to be shut down, and eventually police walk onto the roof while the crowd are booing the police.

The video for "Where the Streets Have No Name" was directed by Meiert Avis and produced by Michael Hamlyn and Ben Dossett. The band attracted over 1,000 people during the video's filming, which took place on the rooftop of a liquor store in Downtown Los Angeles on 27 March 1987. The band's performance on a rooftop in a public place was a reference to The Beatles' final concert, as depicted in the film Let It Be.

"The object was to close down the streets. If there's one thing people in LA hate, it's streets closing down, and we've always felt bands should shake things up. We achieved it because the police stopped us filming. Were we worried about being arrested? Not at the time..."

—Adam Clayton
During the shoot U2 played an eight-song set, which included four performances of "Where the Streets Have No Name". Prior to filming, a week was spent reinforcing the roof of the liquor store to ensure it would not collapse if it were to be intruded by a group of fans. A backup generator was put on the roof so the shooting could continue in the event that the authorities shut off the power on the primary generator, which happened during filming.

The depiction of the police attempting to shut down the video shoot due to safety concerns actually happened during filming, just as seen in the video. Hamlyn was almost arrested following a confrontation with the police. According to Avis, the events depicted in the video show what actually happened that day "almost in real time", and that "getting busted was an integral part of the plan." Band manager Paul McGuinness revealed in 2007 that much of the confrontation with the police was exaggerated; the group were hoping to get shut down by the authorities in order to dramatize the music video, but the police continually gave them extensions for shooting the video. In the background of the video is a sign for The Million Dollar Hotel, which was rebuilt to create some interest, in case no one showed up at the film shoot. Although the video is of a live performance, the audio used is from the studio-recorded version of the song. The video won the Grammy Award for Best Performance Music Video at the 1989 Grammy Awards. 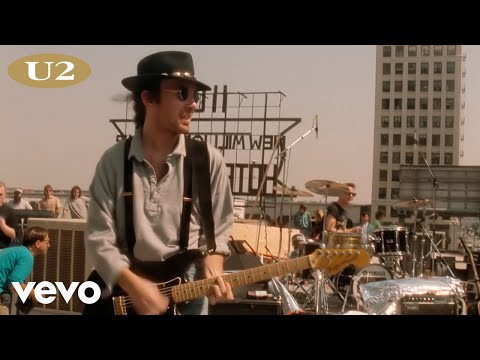