"Thunder Road," was written and performed by Bruce Springsteen, and is the opening track on his 1975 breakthrough album Born to Run. It is ranked as one of Springsteen's greatest songs, and often appears on lists of the top rock songs of all time. Rolling Stone magazine placed it as #86 on its "500 Greatest Songs of All Time."

The song underwent considerable evolution as it was written, with an early version titled "Wings for Wheels" first performed at The Main Point in Bryn Mawr, Pennsylvania, on February 5, 1975. The phrase "wings for wheels," would eventually be used in the final version of the song's lyrics. Other early versions also mention a girl named "Angelina" or "Christina" rather than the studio version's "Mary." Among other changes, including entirely different lyrics for some verses, "Wings for Wheels" originally concluded with "This is a town full of losers, and baby I was born to win," instead of the studio version's ending, "It's a town full of losers, and I'm pulling out of here to win."


The lyrics to "Thunder Road" describe a young woman named Mary, her boyfriend, and their "one last chance to make it real." Thematically, it reads as a nostalgic companion piece to "Born to Run".

Musically, the song opens with a quiet piano and harmonica introduction, meant, as Springsteen said years later in the Wings For Wheels documentary, as a welcoming to both the track and the album, a signifier that something was about to happen. Eschewing a traditional verse-and-chorus structure, the song's arrangement gradually ramps up in instrumentation, tempo and intensity. The title phrase is not used until the middle section of the song, and then is not used again. Finally, after the closing line there is a saxophone-and-Fender Rhodes duet in the instrumental coda.

In this song, Springsteen mentions Roy Orbison "singing for the lonely" on the radio. Orbison, one of whose best-known songs is "Only the Lonely," was a huge influence on Springsteen.

The song's title comes from the Robert Mitchum film Thunder Road. Springsteen declared that he was somehow inspired by the movie despite not having seen it. As he says: "I never saw the movie, I only saw the poster in the lobby of the theater."

At the end of the "VH1 Storytellers"-Show Springsteen concluded: "So this was my... it was my big, my big invitation to my audience, to myself, [chuckles] to uh... anybody who was interested. Uh... my invitation to a long and earthly, very earthly journey. Hopefully in the company of uh, someone you love, people you love, and in search of a home you can feel a part of. Good luck and good evening." 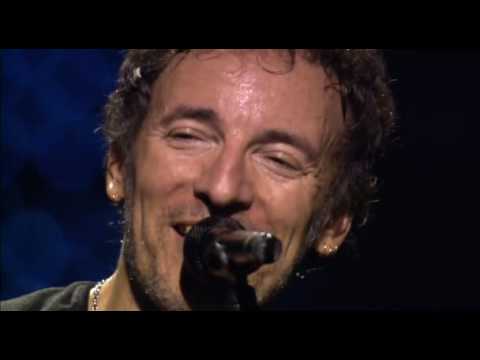