"Nobody's Home" is Avril Lavigne's third single from her second album Under My Skin. The track features Daniel Stern on guitar and was produced by Don Gilmore and written by Lavigne and Ben Moody, former Evanescence guitarist and Lavigne's then-current good friend. "Nobody's Home" is a "rock ballad" with post-grunge oriented sounds and is generally slower paced than her previous singles from Under My Skin. The song is featured on the Totally Hits 2005 CD. One of this song's B-sides, "I Always Get What I Want", was released as a single on iTunes on 31 October 2004. In an AOL Radio listener's poll, "Nobody's Home" was voted Lavigne's seventh best song.
The music video was filmed on 29 and 30 July 2004 in Los Angeles, California, directed by Diane Martel. The video of "Nobody's Home" premiered on 20 October on MTV's Total Request Live. In the music video for "Nobody's Home", Lavigne plays a homeless teenager who appears to live street-to-street with a friend. Lavigne, who said it was a fun video to make, had to wear a black wig and acid-wash jeans when playing the homeless teenager. The video shifts to a more glamorous Lavigne who wears a dress with long, curled hair, singing the song with an orchestra behind her. "Nobody's Home" showed the outcast, homeless Lavigne trying to get off the streets. She also tries to call her mother, but hangs up. As the video progresses, the outcast girl is shown washing herself in a convenience store bathroom. She also tries playing the guitar on the street to try to earn money. Towards the end of the video, the runaway is seen trying to get inside parked cars, eventually finding an unlocked one, during heavy rain. At the end of the video, the girl, with dirty clothes and messy hair, is shown with a tear rolling down her cheek. She then turns around and walks away as the camera fades out. 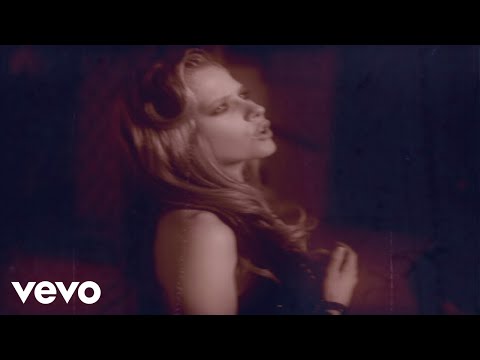