"He Wasn't" is a song by Canadian singer-songwriter Avril Lavigne, released as the fourth and final single from her sophomore album Under My Skin. It was not released in the United States, instead "Fall to Pieces" was released but only as a radio single. The song was released in Germany, Australia and the United Kingdom. Beforehand, it was a released as a third single in Japan in June 2004. It was written and produced by Avril Lavigne and Chantal Kreviazuk. Allmusic highlighted the song as one of the most significative post-grunge songs of all time.
"He Wasn't" is about an unsuccessful relationship between Lavigne and a man who appears to be treating her badly, such as not even opening the door to her. The song is a fast and up-beat take on the boyfriend "not being good enough" as opposed to Lavigne's slower paced songs from "Under My Skin" on the same matter. On a documentary of the making of the "My Happy Ending" music video, "He Wasn't" plays in the background and Lavigne jokes, "'He wasn't what I wanted'...is that a theme on my record?"
The video features Avril singing and her band playing instruments in the background. There are scenes where she dances around wearing white gloves, a pink skirt, and holding a magic wand (she is portraying a fairy), and other scenes where she is wearing devil horns on her head (she is portraying the devil). It turns out that Avril and her band are at a video shoot, and later get into a food fight, much to the dismay of the directors - who are played by Avril and the band, all dressed up in wigs and suits. Avril then rebels and smashes her guitar into the camera lens, and then into the paper wall, where pink paint splashes out. The video ends with the band dancing and Avril doing the splits. Also, during the shooting of the music video when the pink slime came out, Avril tells that days later her hair was still pink and she needed to redye it because during the next days she was scheduled to have a photoshoot with 'Cosmopolitan' and her hair was looking really messy and all pink. 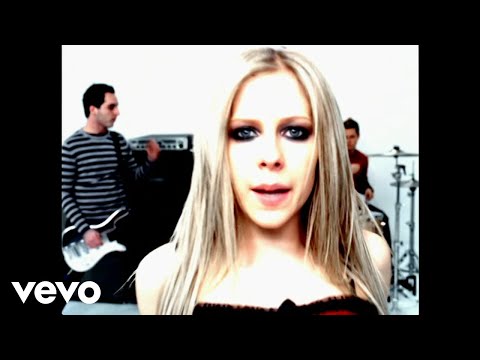