Don't Look Back in Anger

"Don't Look Back in Anger" is a song by English rock band Oasis. It was written by the band's guitarist and main songwriter Noel Gallagher. The song was produced by Gallagher and Owen Morris. Released on 19 February 1996 as the fifth single from their second studio album, (What's the Story) Morning Glory? (1995), it became Oasis's second single to reach #1 on the UK Singles Chart, earning a quadruple-platinum sales certification in the UK. It was the first Oasis single with lead vocals by Noel, who had previously only sung lead on B-sides, instead of his brother Liam. Noel would later sing lead vocals on six other singles.

It is one of the band's signature songs, and was played at almost every live show from its release to the dissolution of the band in 2009. In 2012, it was ranked #1 on a list of the "50 Most Explosive Choruses" by NME, and the same year it was voted the fourth-most-popular No. 1 single of the last 60 years in the UK by the public in conjunction with the Official Charts Company's 60th anniversary. In 2015, Rolling Stone readers voted it the second-greatest Britpop song after "Common People" by Pulp. On 29 May 2017, Absolute Radio 90s broadcast a programme counting down the top 50 songs written by Noel Gallagher to mark his 50th birthday, with the song being voted No. 1. In August 2020, the song was voted as the greatest song of the 1990s by listeners of Absolute Radio 90s as part of celebrations for the station's tenth anniversary.

Noel Gallagher was so excited about the potential of the song when he first wrote it that he used an acoustic set to perform a work-in-progress version, without the second verse and with a few other slight lyrical differences, at an Oasis concert at the Sheffield Arena on 22 April 1995. He said before playing that he'd only written it the previous Tuesday (18 April 1995) and that he didn't even have a title for it yet.

Noel Gallagher said of the song, "It reminds me of a cross between "All the Young Dudes" and something the Beatles might have done." Of the character "Sally" referred to in the song, he commented, "I don't actually know anybody called Sally. It's just a word that fit, y'know, might as well throw a girl's name in there." He explained the song by saying, "It's about not being upset about the things you might have said or done yesterday, which is quite appropriate at the moment. It's about looking forward rather than looking back. I hate people who look back on the past or talk about what might have been." 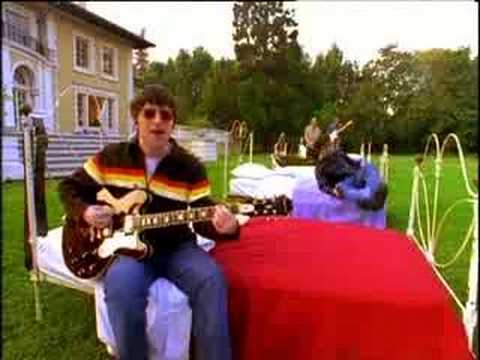