"Who Knew" is a song by American singer-songwriter Pink from her fourth studio album I'm Not Dead (2006). Written by Pink, Max Martin and Dr. Luke, the song was originally released on May 18, 2006 by LaFace Records to radio as the album's second commercial single, but was only moderately successful. After the success of "U + Ur Hand", the song was later successfully re-released in June 2007 as the album's fourth single in the United States. Musically, "Who Knew" is a pop rock song, which contains minor elements of ballad and Soft rock music. Lyrically, it is regarding the loss of a good friend of hers.

Upon its release, "Who Knew" was well received by music critics, who acclaimed it as a solid song on the album and lauded the lyrical content. The song faced comparisons for having similarities with Kelly Clarkson's 2004 single "Since U Been Gone". The song was commercially successful worldwide, where it peaked in the top spot in countries including Australia, Czech Republic, Germany, Hungary and component charts in the United States. In addition, the song is also Pink's longest chart runner on the Hot 100, spending 36 weeks before dropping out. "Who Knew" became one of the songs that helped propel Pink's popularity in the USA, following her decline between 2003 and 2005. The song was later certified Platinum in the United States by the Recording Industry Association of America (RIAA).

The music video supporting the song was directed by Dragon, and was released in May 2006, where it shows Pink singing at a county fair, with a storyline about two young lovers who end up being separated after the man begins using drugs. The song has been performed on many of Pink's world tours, including I'm Not Dead Tour, Funhouse Tour and its extension tour Funhouse Summer Carnival Tour. As her personal favorite, the song was eventually included in Pink's debut compilation album Greatest Hits... So Far!!! (2010).

The NY Daily quotes Pink as writing the song to a female friend (not a male friend) she lost to drug abuse. "Who Knew" was written by Pink, Max Martin and Dr. Luke, while it was produced by Martin and Dr. Luke. "Who Knew" was released as the second single off the album worldwide in 2006, while it was re-released to U.S. radio as the album's fourth single in the United States in 2007, after the success of "U + Ur Hand". On an interview with Daily Mail, Pink explained her teenage years:

"My life was insane, I was out of control and doing lots of stupid things. Some of my friends were selling crack, and I got into drugs too. I've always been honest about that, although I don't like going into details. I've got lots of young fans and I wouldn't want to give them any ideas. I found a friend dead from a drug overdose when I was 14. He was a male friend, not a boyfriend. Most of the people at the funeral were just children. It should have been a wake-up call for me, but it wasn't."

"Who Knew" musically is a pop rock song, which features soft rock and ballad music influences. According to Musicnotes.com, which was published by Kobalt Music Publishing America, Inc., the song is written in the key of A major. Pink's vocal's span from E3 to D5. Lyrically, Pink had explained that the song is about "the death of friendship", as well as friends of hers who died as a result of drug overdoses. The song is about several people. The song features acoustic guitar, keyboards, drums, and electric guitars. Gottwald, Martin and Pink co-wrote another song on the album, "U + Ur Hand".

The single's video was directed by Dragon, a team comprising Sam Bayer, Robert Hales and Brian Lazzaro. It was filmed in the weekend beginning April 15, 2006 in Los Angeles, United States, and it was released to the internet and to UK music channels in early May 2006. The video reached number one on MTV Germany's top ten and on TRL Italy. "Who Knew" was voted number one on TRL Germany twenty times, allowing Pink to earn the "Golden Tape". In the U.S. Total Request Live broadcast a "First Look" of the video on May 22, and it debuted on the show's top ten countdown the following day; it spent eight non-consecutive days on the countdown (until June 9), peaking at number seven.

It features a young couple visiting a fairground and going on the rides, and at one point the boy puts a necklace on the girl. The video flashes back to the boy secretly injecting himself with drugs on a previous night while the girl is sleeping. At the carnival, when the girl is playing a game, the boy walks away. The girl realizes he's gone and follows him, but when she tries to get him to stay with her he gets violent. He goes to the back of the fairground to inject himself with drugs and breaks into a sweat. His girlfriend wanders around looking for him, and finds him unconscious; he has overdosed. She gives him a kiss, gives back the necklace and phones for an ambulance; after it has arrived, she walks away crying. 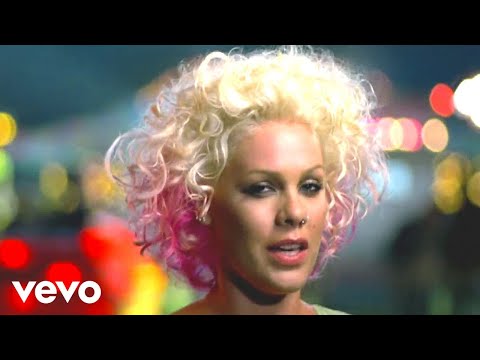