"Charmless Man" is a song by English alternative rock band Blur and is the fourth track on their fourth studio album, The Great Escape. It was released on 29 April 1996 as the fourth and final single from that album, charting at number 5 in the UK Singles Chart.

Speaking in December 1996, Damon Albarn said, "'Charmless Man' was the end of something... it was the end of British pop. For us, anyway". He also commented that the song would be suitable in a musical.

The inspiration for the song came from when Albarn was visiting his grandmother in Lincolnshire. He stopped off at Grantham railway station and when inside the gentlemen's toilet, he noticed a piece of graffiti on a similar theme to the song's title.

The video was directed by Jamie Thraves. The video starts with a man (the Charmless Man, played by Jean-Marc Barr) running down a dark street before entering a hall, where the band are playing. (It becomes clear in retrospect that this is a 'continuous flashback' or Groundhog Day scenario.) After the verse which is accompanied by piano, the band are playing in the bathroom whilst the man uses an electric toothbrush and uses some red wine as mouthwash. After becoming fully dressed, the man goes out into the corridor, where the band are again. After pushing Damon Albarn out of the way, he enters a lift. The band once again are there. They are also there in the foyer when the man leaves the lift. The members of the band hang around outside, when the man, frustrated at the band following him anywhere he goes, pushes Albarn over and kicks him. After calling a cab, he drives off, hoping to be free from the band. They appear at the roadside twice as the man drives down the street. At the third time, the band are standing in the middle of the road and the man drives straight into them, knocking them all over. Following this latest appearance by the band, he smashes the car windows with his fists in anger. He is then seen again running back down the road, with a badly cut hand. He staggers into the hall and the camera zooms in onto Albarn's face as the final notes are played. Albarn has a contemptuous smile on his face. 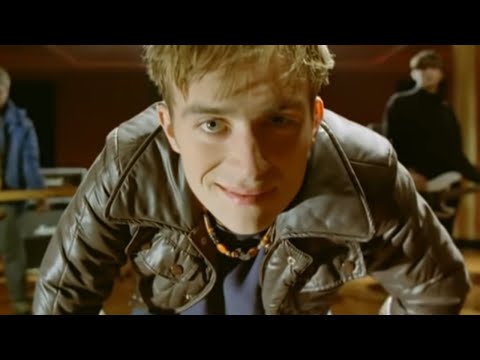