"Feel Good Inc." is an alternative rock song by British virtual band Gorillaz. The song features rap verses by De La Soul and showcases the band's alternative hip hop influences, while also containing elements of drum and bass and funk rock. The lyrical themes of the song revolve around isolation and escapism.

The song was the lead single from the band's second studio album Demon Days on 9 May 2005. The single peaked at No. 2 in the United Kingdom and No. 14 in the United States, the band's highest chart positions to date. It also topped the Hot Modern Rock Tracks chart in the U.S. for eight consecutive weeks, a first for the band. This is the only song in Damon Albarn's career to reach the top 40 on the Billboard Hot 100. It peaked in the top 10 in 17 countries, reaching No. 1 in Spain. The song was listed in Pitchfork Media and Rolling Stone's Best Songs of the 2000s. The song won Best Pop Collaboration at the 2006 Grammy Awards. In an interview during promotion for The Singles Collection 2001–2011, Murdoc described it as "the song that launched a million iPods" and " first song ever to chart on downloads alone, infamous soundtrack to the iPod advert, Grammy award winner, backing track for Madonna's first holographic poledance." This song has surpassed "Clint Eastwood" to be Gorillaz's most successful single worldwide.

In an interview from Gorillaz' "iTunes Session" in 2010, band member 2D states that the inspiration for the song came from the time he was "passing the wind turbines out near Palm Springs. He believed he was going to the Coachella festival or something, and he passed a huge field full of those wind turbines farming the land ... so he started really with the chorus section and then built it up from there."

At the beginning of the video, while the camera is rising up from the Feel Good Inc. tower, a sample of the Spacemonkeyz dub of "Clint Eastwood" entitled "A Fistful of Peanuts" can be heard. The main themes of the video are intellectual freedom and the media's dumbing down of mass culture.

In the video, 2D yearns for the freedom to join Noodle on her floating island. The characters lying on the floor represent those who have already been "dumbed down", while the band members are the ones who have awakened. 2D is trying to wake all the people from their half-dead state by yelling at them through his megaphone, in the style of a political activist. Jamie Hewlett said in an interview that the inspiration for some scenes in the video came from Hayao Miyazaki; specifically, the windmill-powered landmass, which has been compared to that of Miyazaki's Castle in the Sky. The floating island is chased by ominous helicopters, which closely resemble Korean War era Bell H-13s, monitoring the behaviour inside and ensuring that no one escapes. It is unclear whether they are preventing Noodle's escape or are chasing her away. Back in the tower, De La Soul appear as larger-than life, seemingly omnipotent images on surrounding television screens, laughing at the Gorillaz band members. Their taunting drives 2D into a wild, hypnotic frenzy as he tries to resist the urge to be dumbed down. At the end of the video, 2D appears beaten by his surroundings, and returns to the state he was in when the video began, repeating the words "Feel good" until the video finally ends, in an exact reversal of the intro. The repetition of "Feel good" represents that 2D is convincing himself that everything is OK (as if he is brainwashing himself to believe it), instead of facing the harsh truth of the situation. The music video for "El Mañana" is a continuation of this video, depicting two helicopter gunships catching up to Noodle's floating windmill island and attacking it. 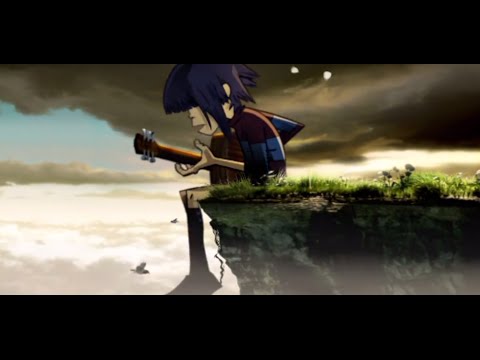