"Papercut" is a song by the American rock band Linkin Park. It was released as the third single from their debut album Hybrid Theory, and appears as the opening track on the record. The "Papercut" single was never officially released in the US. The song reached number 14 in the UK Singles Chart in 2001 and was in the chart for 6 weeks. It also reached number 32 on the Modern Rock Tracks Chart in 2002. Lead singer Chester Bennington has stated that "Papercut" is one of his favorite Linkin Park songs. In live performances, the line "something in here's not right today" is changed to "something inside's not right today". Also, Chester screams parts of the verses during live performances. It was also included in the soundtrack of 2001 film The One.
On Linkin Park's remix album Reanimation (2002), there is a remix of this song, titled "Ppr:Kut", which was remixed by Cheapshot. Elements from the song were used in the song "Sold My Soul to Yo Mama", which appears on the Linkin Park Underground 4.0 and Songs from the Underground. Furthermore, the mashup EP Collision Course (2004) contains a mix of this song and Jay-Z's "Big Pimpin'", in 2005, the song was mashed-up with David Banner's "Like a Pimp (Remix)" for the mixtape hosted by Mike Shinoda (the band's rapper and lead vocalist), Rock Phenomenon, creating the song David Banner vs. Linkin Park.
On the band's previous single, "Crawling", a live performance on the song was included as the single's b-side. The music video shows the band in a seemingly haunted house. They are playing the song in a room with little light with a rather spooky picture sampled from the cover artwork of the Xero demo tape. This was painted by Mike Shinoda the night before the video was shot. To their right of their room is a dark kitchen that sports a bound and writhing figure (likely the paranoid individual referenced in the song); to the left of their room is what appears to be a laboratory with a strange creature inside. It moves extremely fast and in an erratic manner.
Later in the song, the creature releases dragonflies (probably referring to the wings of a Hybrid Theory Soldier), while the baby picture and regions of the left wall bulge. Drummer Rob Bourdon's eyes appear melted as well (using special effects). Also, there is a statue of a bird which spins its head all the way around, and at one point, Mike's fingers stretch. There are parts of the song during which Mike is out of sync with the music, and at one point not even moving his mouth while he is speaking (whether or not this is intentional is unknown). In the video, the first member of the band to take notice of the strange goings-on is Rob (probably because he's the only one not playing an instrument), although bassist Dave "Phoenix" Farrell and Chester Bennington also start to notice the dragonflies and the bulgings on the wall towards the end of the video.
The lyrics of the song appear scribbled along the walls in the dark rooms. Even though the song features heavy distorted electric guitars, Brad Delson play acoustic guitars and Phoenix play acoustic bass in the video. The effects and imagery of the music video, brings to the audience a sense of irritation and certain paranoia, which is what the song is about. At some point in the middle of the video, around 2:03, a strange blue figure runs past the band. Also note that at the end after the screen flashes black once, the band is gone, but their instruments are left where the band members were.
The music video was co-directed by Nathan "Karma" Cox and LP's turntablist Joseph Hahn (who also directed the videos for "Pts.OF.Athrty" and "In the End"). It was not released for the US.
During the commentary on the DVD Frat Party at the Pankake Festival, one of the directors states that some inspiration for the video was taken from the film "Jacob's Ladder", especially with the twitching blue man in one of the rooms of the house. 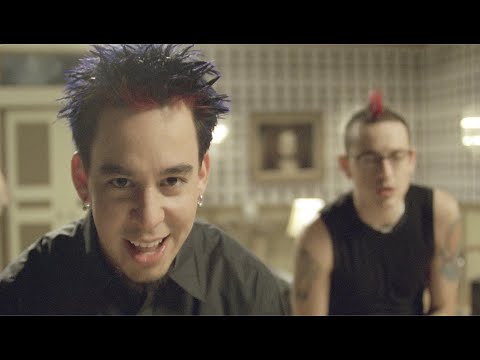