"Nebraska" is a song by Bruce Springsteen and the title song of his 1982 album Nebraska. The song sets the tone for the album, whose content consists mostly of songs about criminals and desperate people, accompanied by just guitar and harmonica. The song has also been covered by other artists, including Steve Earle and Chrissie Hynde.

The song is sung as a first person narrative by Springsteen's version of Charles Starkweather, who along with his teenage girlfriend Caril Ann Fugate murdered 10 people* during an eight-day killing spree in 1958. Although the singer describes the murders and his own trial and impending execution, he sings in a flat, unemotional voice, which makes the events described seem that much more chilling. The song begins with Starkweather meeting Fugate:

I saw her standin' on her front lawn just a-twirlin' her baton
Me and her went for a ride, sir...and 10 innocent people died

The economy of language in the opening is reminiscent of American writer Flannery O'Connor, who Springsteen had been reading just before starting to write the songs for Nebraska. O'Connor's influence is heard throughout the song, with its confused characters who resort to violence. The song's last line, where the singer gives his reason for the killings as "I guess there's just a meanness in this world" is similar to the ending of O'Connor's story "A Good Man Is Hard to Find", where the killer states "it's nothing for you to do but enjoy the few minutes you got left the best way you can - by killing somebody or burning down his house or doing some other meanness to him. No pleasure but meanness." In another line from the song, the singer states that he isn't sorry for what he did and that "At least for a little while, sir, me and her we had us some fun." Springsteen has stated the last stanza, including the lines "into that great void my soul'd be hurled" and "there's just a meanness in this world" summarizes how he saw himself and all of humanity, as dogged by an existential doom.

Springsteen was inspired to write the song after seeing Terrence Malick's movie Badlands on television. The portrait in the opening lines of the girl standing on her front lawn twirling her baton was taken from the movie. He was then inspired to research the subject of the Starkweather killings, including interviewing Ninette Beaver, who had written a book about the killings. Despite his research, in writing the song Springsteen did not create an entirely accurate account of the killing spree. For example, Starkweather was not known to have ever attributed his actions on "a meanness in this world". However, many aspects of the song accurately reflect the historical events. In the song, the singer hopes his "pretty baby is sittin' right there on my lap" when he is executed; likewise, the real life Starkweather did his best to take Fugate down with him (although Fugate escaped execution). In a letter from prison to his parents, Starkweather wrote "But dad I'm not real sorry for what I did cause for the first time me and Caril have (sic) more fun." This is reflected in the lines from the song:

I can't say that I'm sorry for the things that we done
At least for a little while, sir, me and her we had us some fun

Springsteen recorded "Nebraska" on a cassette tape in his bedroom on January 3, 1982, along with the rest of the songs on the album. The tape was originally intended as a demo that he could use to teach the songs to his E-Street Band. When he shared the demo tape with his producer Jon Landau, Landau felt that the song would be well served by an arrangement with string bass, brushed drums and piano, similar to James Taylor's "Fire and Rain." However, the arrangement did not work out. Neither did full-band arrangements of other songs from the demo tape that were tried. Eventually, the original demo version was released on the album.

"Nebraska" has appeared on several Springsteen releases since its initial appearance. A live version with fuller instrumentation and menacing drums was released on Live/1975-85. In 2003, the song was included on the compilation album The Essential Bruce Springsteen. And the song also appears in a segment of the video VH1 Storytellers.

Although not released as a single, "Nebraska" reached #42 on the Billboard Mainstream Rock Tracks chart. 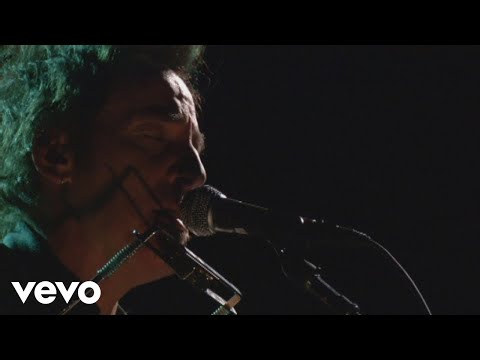