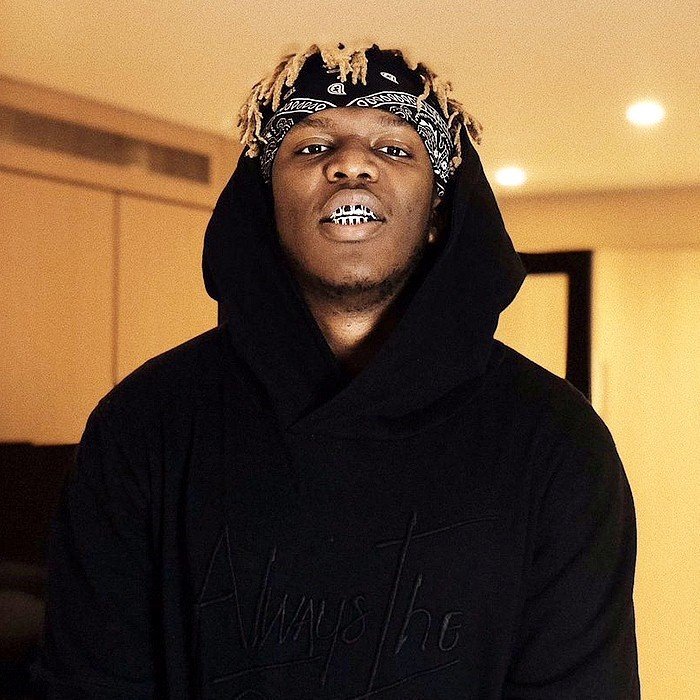 Olajide William "JJ" Olatunji (born 19 June 1993), better known as KSI (shortened from his online alias KSIOlajideBT), is a British YouTube personality, internet celebrity, comedian, actor, rapper and white-collar boxer. After establishing himself on his YouTube channel, which, as of November 2018, has more than four billion video views and more than 20 million subscribers to make it the 65th most subscribed channel on YouTube, he has also become well known for his music. KSI released his debut extended play, Keep Up, in 2016, reaching number one on the UK R&B Albums Chart as well as charting in several other countries.
In 2011, KSI branched out into music, mainly as a rapper. Starting out with fellow YouTuber Randolph, he released "Heskey Time", a rap song about footballer Emile Heskey which was released on iTunes just before Christmas in 2011. The video features Heskey missing various chances on FIFA. Following the success of "Heskey Time", he began doing a segment on his channel called "Football Rap Battles", a video series, on which he and Randolph play the characters of famous figures from the world of football. Although it started off with raps featuring world footballers including Mario Balotelli and managers like Sir Alex Ferguson, one involves KSI as himself against Robin van Persie, hitting out at van Persie's acrimonious transfer from Arsenal to rivals Manchester United. He appeared in music videos with Droideka, directing and appearing in his music video for his song Get Hyper, whilst also collaborating with British rapper Sway, releasing two tracks with the London born rapper.
KSI released his first single as a solo artist on 23 March 2015 titled "Lamborghini", which features rapper P Money. The song was released under Sway's record label Dcypha Productions. On 29 October 2015, KSI announced his debut EP titled Keep Up. It was released on 8 January 2016 by Island Records. The EP's title track, featuring Jme, was released on 13 November 2015 alongside a music video released two days later. On 29 July 2016, KSI released "Friends with Benefits" featuring Dutch musical group MNDM. The song was released as a single to his second EP Jump Around, which was released on 28 October. KSI self-released his third EP, Space, on 30 June 2017, before releasing a fourth titled Disstracktions three months later. The latter became his second EP to top the UK R&B Albums Chart.