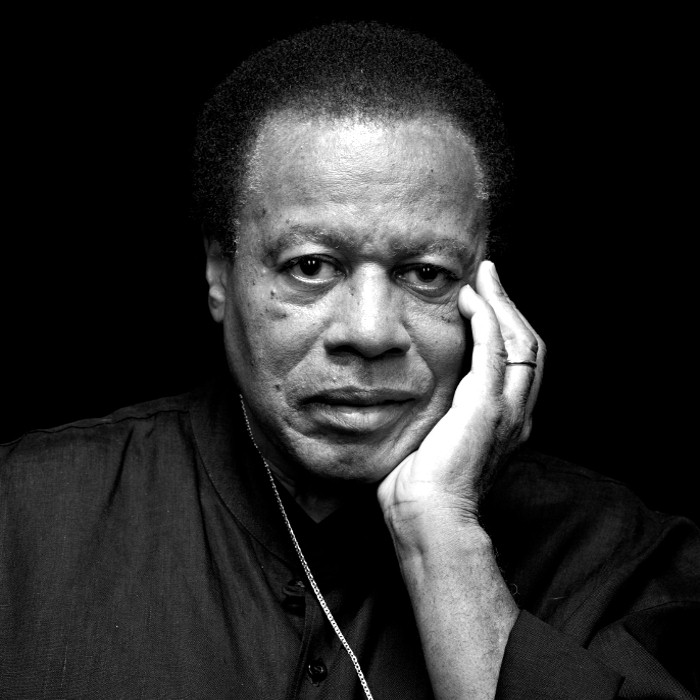 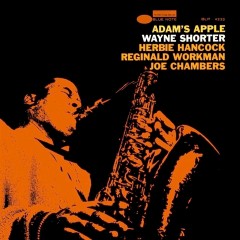 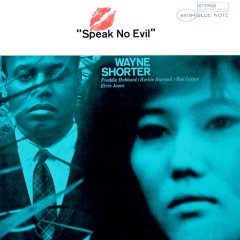 Wayne Shorter (born August 25, 1933) is an American jazz saxophonist and composer.
Jazz critic Ben Ratliff of the New York Times has described Shorter as "probably jazz's greatest living small-group composer and a contender for greatest living improviser." Many of Shorter's compositions have become jazz standards. His output has earned worldwide recognition, critical praise and various commendations, including multiple Grammy Awards. He has also received acclaim for his mastery of the soprano saxophone (after switching his focus from the tenor in the late 1960s), beginning an extended reign in 1970 as Down Beat's annual poll-winner on that instrument, winning the critics' poll for 10 consecutive years and the readers' for 18.
Shorter first came to wide prominence in the late 1950s as a member of, and eventually primary composer for, Art Blakey's Jazz Messengers. In the 1960s, he went on to join Miles Davis's Second Great Quintet, and from there he co-founded the jazz fusion band Weather Report. He has recorded over 20 albums as a bandleader.
Wayne Shorter was born in Newark, New Jersey, and attended Newark Arts High School, from which he graduated in 1952. He loved music, being encouraged by his father to take up the saxophone as a teenager (his brother Alan became a trumpeter). After graduating from New York University in 1956, Shorter spent two years in the U.S. Army, during which time he played briefly with Horace Silver. After his discharge, he played with Maynard Ferguson. In his youth Shorter had acquired the nickname "Mr. Gone", which later became an album title for Weather Report.
In 1959, Shorter joined Art Blakey. He stayed with Blakey for five years, and eventually became the band's musical director.
When John Coltrane left Miles Davis' band in 1960 to pursue his own group, Coltrane proposed Shorter as a replacement, but Shorter was unavailable. Davis went with Sonny Stitt on tenor, followed by a revolving door of Hank Mobley, George Coleman, and Sam Rivers.
In 1964 Davis persuaded Shorter to leave Blakey and join his quintet alongside Herbie Hancock, Ron Carter and Tony Williams. Davis's so-called Second Great Quintet (to distinguish it from the quintet with Coltrane) that included Hancock and Shorter has frequently been cited by musicians and critics as one of the most influential groups in the history of jazz, and Shorter's compositions are a primary reason. He composed extensively for Davis (e.g. "Prince of Darkness", "E.S.P.", "Footprints", "Sanctuary", "Nefertiti", and many others); on some albums, he provided half of the compositions, typically hard-bop workouts with long, spaced-out melody lines above the beat.
Hancock said of Shorter's tenure in the group: "The master writer to me, in that group, was Wayne Shorter. He still is a master. Wayne was one of the few people who brought music to Miles that didn't get changed."Davis said, "Wayne is a real composer. He writes scores, write the parts for everybody just as he wants them to sound. ... Wayne also brought in a kind of curiosity about working with musical rules. If they didn't work, then he broke them, but with musical sense; he understood that freedom in music was the ability to know the rules in order to bend them to your own satisfaction and taste."
Shorter remained in Davis's band after the breakup of the quintet in 1968, playing on early jazz fusion recordings including In a Silent Way and Bitches Brew (both 1969). His last live dates and studio recordings with Davis were in 1970.
Until 1968, he played tenor saxophone exclusively. The final album on which he played tenor in the regular sequence of Davis albums was Filles de Kilimanjaro. In 1969, he played the soprano saxophone on the Davis album In a Silent Way and on his own Super Nova (recorded with then-current Davis sidemen Chick Corea and John McLaughlin). When performing live with Davis, and on recordings from summer 1969 to early spring 1970, he played both soprano and tenor saxophones; by the early 1970s, however, he chiefly played soprano.

Simultaneous with his time in the Davis quintet, Shorter recorded several albums for Blue Note Records, featuring almost exclusively his own compositions, with a variety of line-ups, quartets and larger groups, including Blue Note favourites such as Freddie Hubbard. His first Blue Note album (of 11 in total recorded from 1964 to 1970) was Night Dreamer, recorded at Rudy Van Gelder's studio in 1964 with Lee Morgan, McCoy Tyner, Reggie Workman and Elvin Jones.
JuJu and Speak No Evil are well known recordings from this era. Shorter's compositions on these albums are notable for their use of pentatonic melodies harmonised with pedal points and complex harmonic relationships; structured solos that reflect the composition's melody as much as its harmony; and long rests as an integral part of the music, in contrast with other, more effusive, players of the time such as John Coltrane..
The later album The All Seeing Eye was a free-jazz workout with a larger group, while Adam's Apple of 1966 was back to carefully constructed melodies by Shorter leading a quartet. Then a sextet again in the following year for Schizophrenia with Hancock and Carter plus trombonist Curtis Fuller, alto saxophonist/flautist James Spaulding and strong rhythms by drummer Joe Chambers.
Shorter also recorded occasionally as a sideman (again, mainly for Blue Note) with Donald Byrd, Tyner, Grachan Moncur III, Hubbard, Morgan, and bandmates Hancock and Williams.
Following the release of Odyssey of Iska in 1970, Shorter formed the fusion group Weather Report with Davis veteran keyboardist Joe Zawinul. The other original members were bassist Miroslav Vitous, percussionist Airto Moreira, and drummer Alphonse Mouzon. After Vitous' departure in 1973, Shorter and Zawinul co-led the group until the band's break-up in late 1985. A variety of musicians that would make up Weather Report alumni over the years (most notably the revolutionary bassist Jaco Pastorius) helped the band produce many high quality recordings in diverse styles through the years, with funk, bebop, Latin jazz, ethnic music, and futurism being the most prevalent denominators.
Shorter also recorded critically acclaimed albums as a bandleader, notably 1974's Native Dancer, which featured Hancock and Brazilian composer and vocalist Milton Nascimento.
In the late 1970s and the early 1980s, he toured in the V.S.O.P. quintet. This group was a revival of the 1960s Davis quintet, except that Hubbard filled the trumpet chair. Shorter appeared with the same former Davis bandmates on the Carlos Santana double LP The Swing of Delight, for which he also composed a number of pieces.
From 1977 through 2002, he appeared on 10 Joni Mitchell studio albums, gaining him a wider audience. He played an extended solo on the title track of Steely Dan's 1977 album Aja.

After leaving Weather Report, Shorter continued to record and lead groups in jazz fusion styles, including touring in 1988 with guitarist Carlos Santana, who appeared on This is This!, the last Weather Report disc. There is a concert video recorded at the Lugano Jazz Festival in 1987, with Jim Beard, keyboards, Carl James, bass, Terri Lyne Carrington, drums and Marilyn Mazur, percussion.
In 1989, he contributed to a hit on the rock charts, playing the sax solo on Don Henley's song "The End of the Innocence" and also produced the album Pilar by the Portuguese singer-songwriter Pilar Homem de Melo. He has also maintained an occasional working relationship with Herbie Hancock, including a tribute album recorded shortly after Miles Davis's death with Hancock, Carter, Williams and Wallace Roney. He continued to appear on Mitchell's records in the 1990s and can be heard on the soundtrack of the Harrison Ford film The Fugitive (1993).
In 1995, Shorter released the album High Life, his first solo recording for seven years. It was also his debut as a leader for Verve Records. Shorter composed all the compositions on the album and co-produced it with the bassist Marcus Miller. High Life received the Grammy Award for best Contemporary Jazz Album in 1997.
Shorter worked with Hancock once again in 1997, on the much acclaimed and heralded album 1+1. The song "Aung San Suu Kyi" (named for the Burmese pro-democracy activist) won both Hancock and Shorter a Grammy Award.
In 2009, he was announced as one of the headline acts at the Gnaoua World Music Festival in Essaouira, Morocco. His 2013 album Without a Net is his first with Blue Note Records since Odyssey of Iska.

In 2000, Shorter formed the first permanent acoustic group under his name, a quartet with pianist Danilo Perez, bassist John Patitucci, and drummer Brian Blade, playing his own compositions, many of them reworkings of tunes going back to the 1960s. Three albums of live recordings have been released, Footprints Live! (2002), Beyond the Sound Barrier (2005) and Without A Net (2013).
The quartet has received great acclaim from fans and critics, especially for the strength of Shorter's tenor saxophone playing. The biography Footprints: The Life and Work of Wayne Shorter by journalist Michelle Mercer examines the working life of the musicians as well as Shorter's thoughts and Buddhist beliefs.Beyond the Sound Barrier received the 2006 Grammy Award for Best Instrumental Jazz Album.
Shorter's 2003 album Alegría (his first studio album for 10 years, since High Life) received the 2004 Grammy Award for Best Instrumental Jazz Album; it features the quartet with a host of other musicians, including pianist Brad Mehldau, drummer Carrington and former Weather Report percussionist Alex Acuña. Shorter's compositions, some new, some reworked from his Davis period, feature the complex Latin rhythms that Shorter specialised in during his Weather Report days.
Shorter met Teruka (Irene) Nakagami in 1961. They were later married and had a daughter, Miyako. Some of his compositions are copyrighted as "Miyako Music". Shorter dedicated some pieces to his daughter: "Miyako" and "Infant Eyes". The couple separated in 1964.
Shorter met Ana Maria Patricio in 1966 and they were married in 1970.In 1985, their daughter Iska died of a grand mal seizure at age 14. Ana Maria and the couple's niece, Dalila, were both killed on July 17, 1996, on TWA Flight 800, while en route to see him in Italy. Dalila was the daughter of Ana Maria Shorter's sister and her husband, jazz vocalist Jon Lucien. In 1999, Shorter married Carolina Dos Santos, a close friend of Ana Maria. He is a Nichiren Buddhist and a member of Sōka Gakkai. 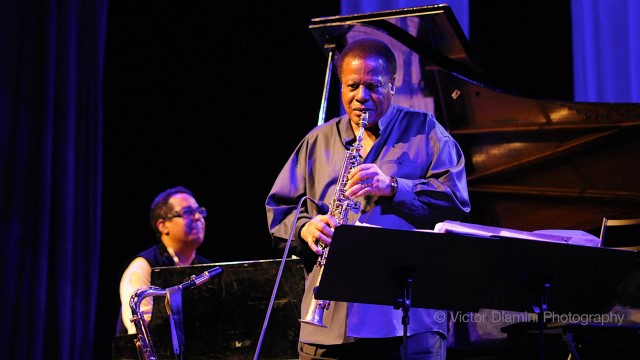 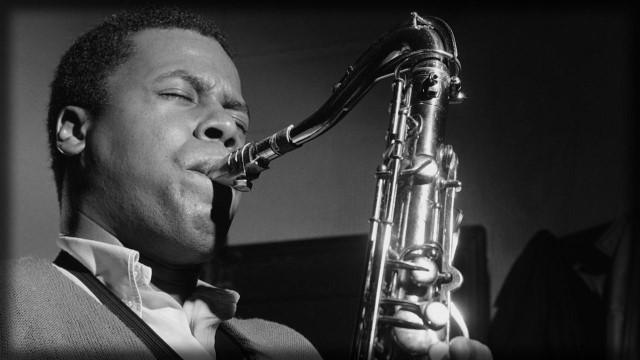 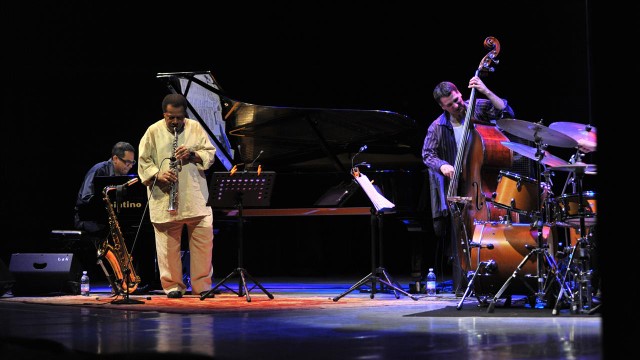