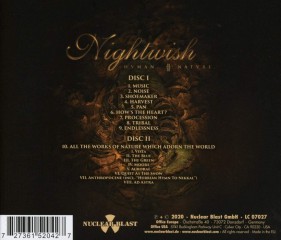 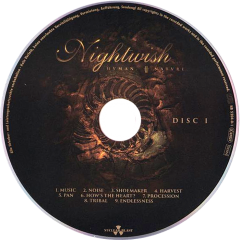 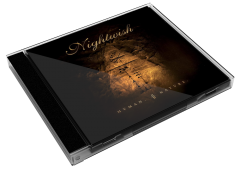 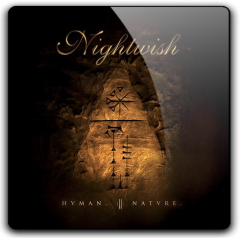 Human. :II: Nature. (stylized as HVMAN. :||: NATVRE.) is the ninth album by Finnish symphonic metal band Nightwish. It was released internationally on April 10, 2020 through Nuclear Blast. It is the band's first double album, with second CD complete with orchestral symphonic music rather than metal.

Following the departure of original drummer Jukka Nevalainen the previous year, this is the first album to feature Kai Hahto as official band member, although he had already acted as Nevalainen's replacement on the band's previous album, Endless Forms Most Beautiful.

Background and recording
Production
Following a tour in support of the band's previous album, Endless Forms Most Beautiful, the band took a year-long break in which Jansen was focusing on her first child. Holopainen said in a 2016 interview that the band would continue between the years of 2018 and 2020, with another album that will continue the themes explored in Endless Forms Most Beautiful.

According to Tuomas Holopainen, after the creation of the previous album, which he described as "the band's best so far", he could not write new material for the next album because of his lack of inspiration, which was "emptied". In 2017, Holopainen, along with the singer and his wife Johanna Kurkela and the band's member Troy Donockley, formed the trio-band Auri to create a self-titled album. After the release of the album, Tuomas said that "all the flood gates opened" and he started to write new material for Nightwish.

In July 2018 while the band was out on tour, Holopainen stated that he had written "80 or 90%" of the material for Nightwish's next album, which would consist of ten or eleven songs. Recording would start in July 2019, for a planned Spring 2020 release. The band would "use the instrumentation in a different way than before", with Holopainen stating, "You want to search for some new ways of using it so that it doesn't end up sounding the same as before."

Jansen stated in November that she believed the recording process would be similar to Endless Forms Most Beautiful's, for which the band went through lengthy rehearsals before starting to record.

On October 31, 2019, Floor Jansen confirmed that recording for the new album had been completed, stating that she was "very, very happy" with it. Tuomas Holopainen was confirmed on December 18, 2019, to be at Finnvox Studios mixing Nightwish's upcoming studio album, set for release in the first quarter of 2020.

The mixing was done by Holopainen, Tero Kinnunen and Mikko Karmila, and mastering by Mika Jussila, at Finnvox Studios. On January 10, 2020, it was confirmed by Holopainen that the production was finished, and the album was ready for release. The album title, cover and other details were released on January 16, 2020, including the release date of April 10, 2020.

Composition
Influences, style and themes
The album features a wide vocal collaboration between Jansen, Marco Hietala and Troy Donockley, which "brings a whole new sound in the band", according to Jansen. It can be reflected for example in first song in the album, "Music", which describes the history of music, "from the first rudimentary sounds to the music as we know today". This song starts with a long intro and described as very harmonic and melodic.

"Shoemaker" is about Eugene Shoemaker, whose biography inspired Holopainen to write a song on. According to Jansen, the song lacks of a typical structure. Consists of operatic voices, the song was a challenge to Jansen to sing, and it took several times to record until the desired result.

According to Donockley, the lyrics of "Harvest" consist of the meaning of the whole theme of the album and even of life.

About "How's the Heart?", Holopainen has said: "Human empathy, altruism, true love. They truly are the better angels of our nature. The nature of the human kind. We have the potential to be such a great species. And in many ways we already are. It is really important to remember to ask your family, your friends, strangers and yourself the important question: How's The Heart?"

"Tribal" is described by Hahto as heavy and very percussive. This song along with other tracks in the album demanded Hahto to upgrade his drum kit. According to Hahto, this song is an example to the variety of the different musical styles presented in the whole album.

Nightwish stated on January 22, 2020, that they became the "first band ever to be given permission" to do a photo shoot in the "legendary Cathedral that is the Natural History Museum, London," where they had four hours to themselves during the shoot.

On the day the album was released, Nightwish released lyric videos for all of the songs on the album.

User Album Review
Thinking big has been such an intrinsic part of Nightwish’s DNA for so long that you do wonder if keyboard maestro and creative magician Tuomas Holopainen actually understands that it’s possible to make music without using The Lord Of The Rings soundtrack as some sort of benchmark. To wit, even elements that once seemed like giant steps for the Finnish symphonic metallers – like fulfilling his classical dreams by employing the services of The London Session Orchestra on 2005’s Once breakthrough – are now simply what this band do. And yet they still build, and on 2015’s superb Endless Forms Most Beautiful, the idea of the very nature of life was tackled to such a degree that they got Richard Dawkins to lend a few words.

What’s surprising about Hvman:||:Natvre, then, isn’t that it’s a double album, nor that the second disc is entirely instrumental, classical music, but that it’s taken them nine albums to get round to such a thing. And also that the results, while banging enough Nightwish material, aren’t quite massive enough that they’re struggling to fit onto the canvas.

First track proper, Noise, is a classic Nightwish statement of grandeur, while Shoemaker delivers a moment of full-on opera, and Pan’s changes from major to minor are genuinely skilful, as the song sounds like its descending into madness. Elsewhere, Tribal boasts a chugging, heavy riff, and Endlessness has moments of pure doom. In these moments, the pomp and splendour at the heart of this band shines impressively, a testament to their natural skill and creativity.


However, it does feel a tad one-paced, and in the folky Harvest, a cheese-fest, even by Nightwish’s standards, the album delivers perhaps the lamest thing this band have ever done. And while the classical second half should be applauded for it’s artistic bravery, it’s not as OTT as you’d hope, more background music like the soundtrack to a movie you haven’t actually seen. Clearly, though, it shows that were you in need of a rock star to score a movie, Tuomas is more than capable.

At its best, Hvman:||:Natvre has the impressive magic that has made Nightwish one of Europe’s biggest bands. But there’s a feeling this time that for such a big concept, things haven’t gone quite far enough.