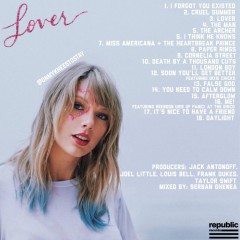 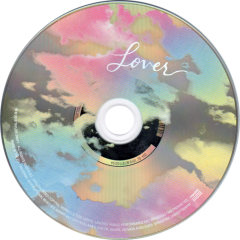 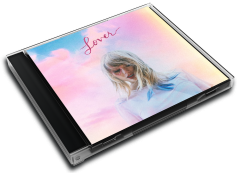 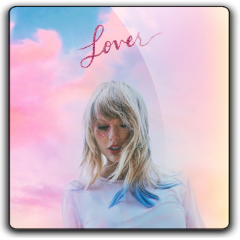 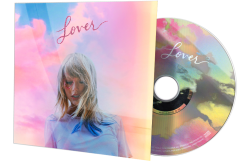 Lover is the seventh studio album by American singer-songwriter Taylor Swift. It was released on August 23, 2019, by Republic Records. As executive producer, Swift worked with producers Jack Antonoff, Joel Little, Louis Bell, Frank Dukes, and Sounwave on the album. Described by Swift as a "love letter to love", Lover celebrates the ups and downs of love and incorporates brighter, more cheerful tones, departing from the dark sounds of its predecessor, Reputation (2017). It has been described as a pop, pop rock, electropop and synth-pop release, that contains influences of country music, pop punk and contemporary R&B.

Lover features collaborations with the Dixie Chicks and Brendon Urie of Panic! at the Disco. It was preceded by three singles, the international top-five singles "Me!" and "You Need to Calm Down", and the title track. The album received generally positive reviews from critics, who commended Swift's songwriting conveying emotional maturity and honesty. A few commentators found the album lengthy and inconsistent in places.

Background
Speculation of the album started on February 24, 2019, when Swift posted a photo of seven palm trees to her Instagram account, which she later confirmed was the day she finished the album. On April 13, Swift released a countdown on her official website, counting down to midnight EDT (UTC-04:00) on April 26. At midnight, Swift released the album's lead single, "Me!" featuring Brendon Urie of Panic! at the Disco, along with its accompanying music video. Swift encouraged fans to find hints about the album title in the video and many fans pointed out that at one point in the video, the word "Lover" appeared at the top of a building in the background.

On June 13, 2019, Swift confirmed the album title in a livestream on Instagram, and that the album would be released on August 23, 2019. The numbers of the release date (eight, two, and three) add up to 13, Swift's favorite number. Swift also announced that the album's second single, "You Need to Calm Down", would be released the next day on June 14, followed by its music video three days later. She described the album as a romantic one, stating that it was "not just simply thematically, like it's all love songs or something. The idea of something being romantic, it doesn't have to be a happy song. You can find romance in loneliness or sadness or going through things in your life... it just looks at those things through a romantic gaze." In a Vogue interview published in August 2019, Swift described the album as a "love letter to love, in all of its maddening, passionate, exciting, enchanting, horrific, tragic, wonderful glory." While promoting the album in a YouTube livestream on August 22, Swift revealed that the title of the album was Daylight before she wrote the song "Lover".

Music and lyrics
At eighteen tracks, the standard edition is the longest in Swift's catalogue. The deluxe edition adds two voice memos. Lover is a departure from the darker, hip hop-influenced sound of Reputation (2017), returning to the 1980s-influenced synth-pop of 1989 (2014). Lover also revisits the country music of Swift's earlier albums, and draws from a range of genres including pop, pop rock, electropop, pop punk, and R&B. Many publications also noted Swift's tackling of politics and social issues in the album, after previously receiving criticism for maintaining an apolitical public image.

Opener "I Forgot That You Existed" is a cheery farewell to the events that inspired Reputation, set to a minimalist arrangement of piano and finger snaps. "Cruel Summer" is a synth-pop song co-written with St. Vincent, which according to Swift is about "the feeling of a summer romance... where there's some element of desperation and pain in it, where you're yearning for something you don't quite have yet". "Lover", the title track and third single, is a slow country waltz that has been compared to Mazzy Star's "Fade into You". In "The Man", over an uptempo, synth-pop tune, Swift imagines the media's treatment of her if she were male. The promotional single "The Archer" is a dream pop song in which Swift reflects on her flaws. The funk-influenced "I Think He Knows" sees Swift examining the blossoming of a relationship, while also referencing Nashville's Music Row.

The high school setting of "Miss Americana & the Heartbreak Prince", complete with cheerleader chants, is reminiscent of Swift's earlier work "You Belong with Me". The gloomy synth-pop song has been interpreted as Swift expressing disillusionment over the state of US politics, and was compared to the work of Bruce Springsteen and Lana Del Rey. The bubbly "Paper Rings" contains elements of pop punk, in which Swift sings about committing to a relationship. "Cornelia Street" is named after a street in Greenwich Village where Swift rented an apartment; in the piano-backed ballad, she expresses fears that her fledging relationship will not survive. The upbeat breakup song "Death by a Thousand Cuts" was inspired by the Netflix film Someone Great, which in turn was inspired by Swift's 2014 album 1989. "London Boy" features a spoken word intro from Idris Elba and James Corden, who stars with Swift in the film Cats, namechecks the designer Stella McCartney, with whom Swift launched a fashion line in connection with the album, and is presumed to be about Swift's partner, actor Joe Alwyn. Some commentators drew parallels with Ed Sheeran's "Galway Girl". The country ballad "Soon You'll Get Better" features slide guitars and the Dixie Chicks contributing banjo, fiddle, and backing vocals; Swift addressed her parents' battle with cancer, especially her mother's second bout.

"False God" is a sensuous R&B-influenced love song, where a lone saxophone intertwines with lyrics invoking religious imagery. The second single "You Need to Calm Down" is an LGBT-friendly anthem that takes aim at internet trolls and homophobes alike. The ballad "Afterglow" sees Swift apologizing to a romantic partner for the failure of a relationship. Swift duets with Urie of Panic! at the Disco in the lead single "Me!" about themes of self-affirmation and individualism. The indie pop-influenced ballad "It's Nice to Have a Friend" charts the progression of a romance from childhood into adulthood, with Swift's vocals backed by steel drums, harps, and punctuated by a trumpet solo near the middle. The song also samples the track "Summer in the South" from the album Parkscapes by the Toronto-based Regent Park School of Music. The closing ballad "Daylight" calls back to the song "Red" from the 2012 album of the same name; some publications interpreted it as a sign of Swift's personal growth and more mature understanding of love. The song ends with Swift delivering a monologue: "I want to be defined by the things I love. Not the thing I hate, not the things I'm afraid of, not the things that haunt me in the middle of the night. I think that you are what you love."

User Album Review
On her seventh album, the pop mega-force leaves behind the anger that fuelled its predecessor, 'Reputation', instead opting for open-hearted love songs

The title of Taylor Swift’s seventh album isn’t misleading. After 2017’s bitter and combative ‘Reputation’, she’s returned to the wide-eyed but incisive romantic pop that made her a superstar. At 18 tracks long, ‘Lover’ is more sprawling and further from flawless than her 2014 pop crossover ‘1989’. But it succeeds in spite of its clunkier moments because Swift’s melodies are frequently dazzling and her loved-up lyrics are ultimately quite touching.

It’s telling that terrible lead single ‘Me!’ has been relegated to track 16 at the tail end of the album. With playful lyrics like “I know that I’m a handful, baby”, it’s supposed to be a sparkling reintroduction to Swift’s fun side, but tries too hard and ends up sounding like a jingle for a cheesy TV ad offering you £50 to switch your bank account. Thankfully, it’s one of only two major misfires. The other, spare opening track ‘I Forgot You Existed’, is a tedious ‘Reputation’ retread. “It isn’t love, it isn’t hate, it’s just indifference“, Swift sings to someone who’s wronged her in the past, somewhat undercutting her message by, um, writing a song about them.


Much of ‘Lover’ is far more infectious. “‘I love you’ – ain’t that the worst thing you ever heard?’” Swift sings knowingly on ‘Cruel Summer’, a brilliant pop song co-written with Annie “St. Vincent” Clark. The equally fantastic ‘I Think He Knows’ tip-toes as close to funk as Swift can get away with, and peaks with one of those economical-yet-evocative lyrics that she built her pre-‘Reputation’ reputation on. “His hands around a cold glass, make me wanna know that body like it’s mine,” she sighs, capturing all the excitement of unbridled lust in a neat 15 words.

‘London Boy’ is an endearingly awkward celebration of spending time with her partner, Joe Alwyn, in various parts of his hometown – both Brixton and Shoreditch get a mention. “And now I love high tea, stories from uni, and the West End,” Swift sings unselfconsciously. “You can find me in the pub, we are watching rugby with his school friends.” A spoken-word intro from Idris Elba – because Swift obviously can call in a favour from Idris Elba – adds to the clumsy fun.


Other ‘Lover’ highlights are more stripped back. The title track is a lovely, dusky nugget that suggests Swift could have been an alt-country singer if she’d wanted, while ‘Soon You’ll Get Better’ recruits the Dixie Chicks for an affecting snapshot of her mother’s cancer treatment. “You like the nicer nurses, you make the best of a bad deal, I just pretend it isn’t real,” Swift sings matter-of-factly; anyone who’s visited a sick loved one in hospital will relate. The glistening synth-pop’ of ‘The Archer’, home to another excellent melody, benefits from a similar effortlessness and lightness of touch.

One of the album’s two most obvious statement songs is a qualified success. “They’d say I hustled, put in the work, they wouldn’t shake their heads and question how much of this I deserve,” Swift sings pithily on ‘The Man’, a blunt clap-back to the sexist double standards that have infected her press coverage. “I’d be just like Leo in Saint Tropez.” It’s thrilling stuff and the DiCaprio name-check is bang on, but the song is probably too focused on the particulars of the Taylor Swift experience to become a hugely useful feminist anthem.

The other, ‘You Need To Calm Down’, finds Swift trying to align herself with the LGBTQ community – the video is a veritable ‘who’s who’ of queer celebrities including Ellen DeGeneres, Orange Is The New Black actress Laverne Cox, Pose star Billy Porter, Olympic figure skater Adam Rippon and pop singer Hayley Kiyoko. It’s clearly well-intentioned, but when Swift sings “shade never made anyone less gay”, she sounds less like someone whose mind was blown when they watched Paris Is Burning for the first time, and more like someone who caught a couple of episodes of RuPaul’s Drag Race at their mate’s house.

Then again, Swift is hardly the first singer-songwriter to sound most comfortable when she’s singing about herself. Despite the odd dud, ‘Lover’ is a welcome reminder of her songwriting skills and ability to craft sonically inviting pop music. Together with co-producers including Jack “Bleachers” Antonoff and Joel Little (Lorde, Khalid), she’s made another slick and accessible record flecked with surprising production flourishes. ‘False God’ offers a balmy mix of sax and trap, the shimmering ‘Death Of a Thousand Cuts’ has echoes of ‘Tango In The Night’-era Fleetwood Mac, and ‘Paper Rings’ is an ‘80s-style pop stomper punctuated with Ramones-style “eh! oh!”s. Yes, really.

To call ‘Lover’ a comeback feels like a reach considering that ‘Reputation’, her lowest-selling album to date, still went triple Platinum in the US. So let’s just say that the old Taylor can’t come to the phone right now – ‘cause she’s busy writing songs that suit her again.