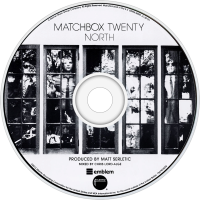 Matchbox 20 never quite broke up. Rather, they simply faded away. One day, they were ubiquitous, the next, they just weren't there and they stayed hidden for the better part of a decade, cobbling together a hits album and accompanying tour in 2007 but taking their time crafting their fourth album. A full ten years separate 2012's North and its predecessor, More Than You Think You Are, a decade gap that seems slightly shorter due to Rob Thomas' pair of solo albums and also in how Matchbox 20 pick up where they left off, spending only the briefest amount of time reckoning with pop trends that have surfaced since their last record (i.e., the disco-rock pulse of "Put Your Hands Up" and a few groove-oriented cuts that betray the influence of Maroon 5). But that doesn't necessarily mean North is a relic of the new millennium, sounding like everything else the band's ever done. Remarkably, Matchbox 20 has lightened up with age, whittling away any excess and pretension, winding up with their first album that could truly be called pop. It's a big, bright, shiny record anchored with odes to the radio and partying, its few love songs sweet and easy, not tortured. At times, the slick muscular melodicism of North recalls prime Third Eye Blind more than Matchbox 20 -- hooks are always pushed to the forefront, everything is wrapped in alluring gloss -- but Thomas possesses a warm vulnerability that always eluded Stephan Jenkins, and Matchbox 20, as a whole, is coolly, expertly professional, turning out immaculate AAA pop that still manages to have personality. True, North feels more 2002 than 2012 -- something that may hurt its commercial potential, as there are far fewer outlets for this kind of pop in 2012 than there were in 2002 -- but Matchbox 20 has never made a record as cheerful or appealing or satisfying as this.