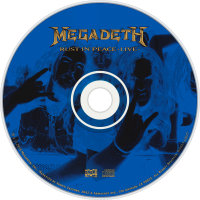 Rust in Peace Live is a live album by American heavy metal band Megadeth, released in 2010 through Shout! Factory in Blu-ray, DVD, and CD formats. Filmed at the Hollywood Palladium on March 31, 2010, the performance showcases Megadeth's 1990 album, Rust in Peace played in its entirety with the same background that was featured on the original "Rust in Peace" tour. The release was in celebration for the 20th anniversary of Rust in Peace and it is the first Megadeth release since 2002's Rude Awakening to feature bassist Dave Ellefson.
Furthermore, Roadrunner Records submitted the album to consideration for Best Rock Album at the 53rd Grammy Awards.[dead link]
The album managed to chart at # 161 on the Billboard 200 chart upon its release. Meanwhile, the video version of the album hit #2 on the Top Billboard 50 Music Videos chart. As of April 2011, about 19,000 copies of the DVD have been sold in the U.S.