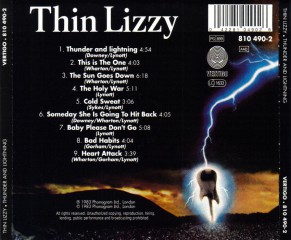 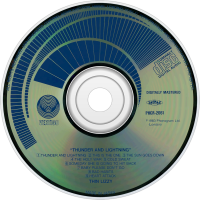 Thunder and Lightning is the twelfth and final studio album by Irish heavy-rock band Thin Lizzy, released in 1983. Guitarist John Sykes was hired to replace Snowy White after 1981's Renegade, and Sykes helped to provide a heavier sound and guitar tone than Thin Lizzy had used on previous albums. However, the bulk of the songwriting (except for "Cold Sweat") was completed before he joined the band. Keyboard player Darren Wharton also offered a stronger musical influence to Thin Lizzy's final studio album, co-writing many of the tracks including "Some Day She Is Going to Hit Back", and the final single "The Sun Goes Down". A farewell tour followed the album's release, followed by the live album Life. The group's founder, frontman and bass player Phil Lynott died in 1986 from drug-related causes.