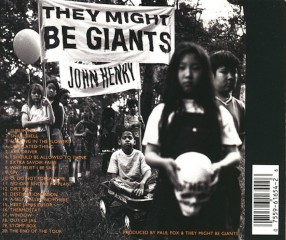 John Henry is the fifth studio album by American alternative rock group They Might Be Giants. It was released in 1994. It is the first album by They Might Be Giants to include a full band arrangement, rather than synthesized and programmed backing tracks. The album's name, a reference to the man versus machine fable of John Henry, is an allusion to the band's fundamental switch to more conventional instrumentation, especially the newly established use of a human drummer instead of a drum machine.

John Henry is TMBG's longest record and was the band's highest-charting adult album, having peaked at #61 on the Billboard 200, until 2011's Join Us, which peaked at #32. In 2013, the album was reissued across a double LP by Asbestos Records.