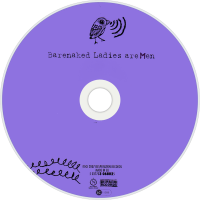 Barenaked Ladies Are Men (sometimes abbreviated BLAMen or Are Men) is the eighth studio album by Barenaked Ladies, and the second release of material from the 29-song session that bore the companion album Barenaked Ladies Are Me. The two albums (or at least their material) were released together under the Are Me title in several "deluxe" release methods before Are Men received its own proper official release in February 2007. In this way, Are Me and Are Men together may be considered the band's seventh full-length original-material studio album. The album's artwork was created by Team Macho who also did similar artwork for the Are Me releases. The title is an extension of the Are Me title. During touring for the two albums, a pre-show video showed an unidentified hand adding various other extensions to the Barenaked Ladies Are Me title.

The formal release of the album is an Enhanced CD, and contains software and individual tracks that allow the owner to remix three of the band's songs. An advanced release of the album, exclusive to Canadian Starbucks, was released on October 3, 2006. This version lacked the Enhanced CD feature, as well as final four tracks, which at the time were deemed "bonus tracks" for the Are Me release, both in its single-album form, and its 25-track deluxe form. The Starbucks version, however, included the two singles at the time from Are Me.

Upon its release, Barenaked Ladies Are Men reached #102 in the US and #39 in the band's native Canada.