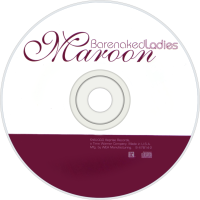 Maroon is the fifth full-length studio album by Barenaked Ladies. The album was the follow-up to 1998's Stunt, which was the band's most successful album in the United States. Maroon debuted at #1 in Canada (their second to reach #1 after 1992's Gordon) and #5 on the U.S. Billboard 200. In its first week, the album sold 17,800 copies in Canada and just under 128,000 in the United States. It has sold at least 1 million copies in the U.S. alone. With keyboardist Kevin Hearn's leukemia battle won, and with an instinct to play down the jokey reputation they were so known for, BNL deliberately created a more serious and sophisticated album. The album spawned three successful singles which still receive moderate airplay: "Pinch Me", "Too Little Too Late" and "Falling for the First Time".

Unlike past albums, the songs came almost entirely from the pairing of Page/Robertson. One track, "Baby Seat", was written by Page with his longtime song-writing partner, Stephen Duffy. This was the last Page/Duffy track that Barenaked Ladies would release, starting a policy of keeping the writing within the band on their next album. "Hidden Sun", written while Hearn was in the hospital, appears as a hidden track on most copies of the album[citation needed]. As with each of their early albums, the band recorded one song, "Humour of the Situation", completely naked.