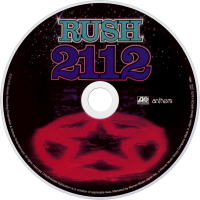 Released in 1976, the album features an eponymous seven-part suite written by Geddy Lee and Alex Lifeson, with lyrics written by Neil Peart telling a dystopian story set in the year 2112. The album is sometimes described as a concept album although the songs on the second side are unrelated to the plot of the suite. Rush repeated this arrangement on the 1978 album Hemispheres.

2112 is one of two Rush albums listed in 1001 Albums You Must Hear Before You Die (the other being Moving Pictures). In 2006, a poll of Planet Rock listeners picked 2112 as the definitive Rush album. In 2012, the album came in at #2 on Rolling Stone's list for 'Your Favorite Prog Rock Albums of All Time', as voted for in a reader's poll, being one of three Rush albums included on the list (the others being Moving Pictures and Hemispheres).

The Toronto dates of the 2112 tour were recorded and released as All the World's a Stage in September 1976.