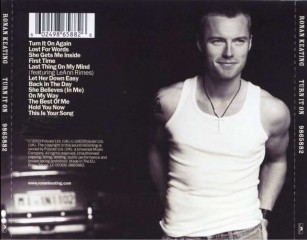 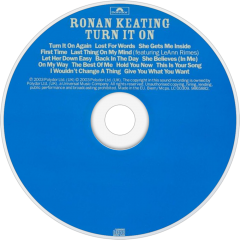 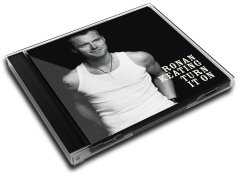 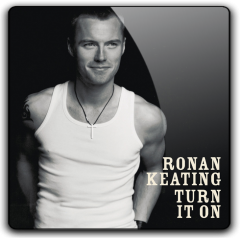 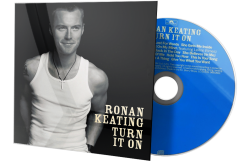 While its cover art, which features a stubbly Ronan Keating posing in a white sleeveless vest, suggests that the Boyzone frontman has undergone either a George Michael-esque reinvention or a rock star makeover, his third solo album, Turn It On, heads even further toward the middle-of-the-road country-pop territory that he previously hinted at through his chart-topping cover of Garth Brooks' "If Tomorrow Never Comes." The all-star songwriting team of his two previous releases, Ronan and Destination, which included New Radicals' Gregg Alexander and Diane Warren, is gone, and in its place is Keating himself, who co-wrote all but two of its 14 tracks alongside the likes of Steve Robson, Wayne Hector, and Steve Mac (Westlife), giving an indication of the disappointingly regressive direction Keating is heading. Packed full of easy listening acoustic midtempo tracks, the likes of the Latin-flavored "First Time," the mellow "She Gets Me Inside," and the rootsy "On My Way" are all produced with sophistication but lack any of the spark that "Life Is a Rollercoaster" and "Lovin' Each Day" had in abundance, while anodyne covers of Kenny Rogers' "She Believes (In Me)" and Terence Trent D'Arby's "Let Her Down Easy" do little to change the monotone sound that dominates the majority of the album. However, when Keating attempts something a little more upbeat, Turn It On becomes much more interesting. "Turn It on Again" is an infectious slice of FM rock, co-penned by Ricky Ross, which is just as driving and melodic as Ross' '80s material with Deacon Blue; the Bryan Adams-esque "Back in the Day" allows Keating the opportunity to showcase his newfound husky vocals; and the captivating "Last Thing on My Mind" is a surprisingly subtle duet with LeAnn Rimes that cleverly meets in the middle of their increasingly near-colliding musical paths. Keating claims that Turn It On is the chance "to see the real me," but its overreliance on melancholic ballads and notable absence of the feel-good factor of his previous output suggest that maybe the real Ronan needs to lighten up a little.