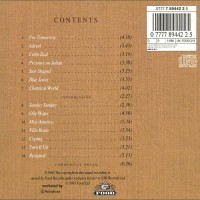 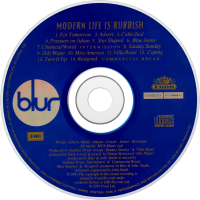 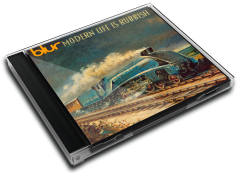 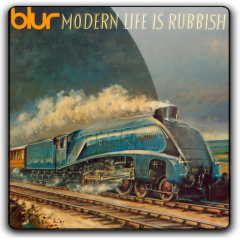 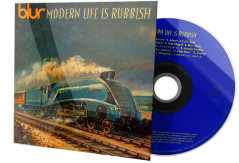 Modern Life Is Rubbish is the second album by English alternative rock band Blur, released in May 1993. Although their debut album Leisure (1991) had been commercially successful, Blur faced a severe media backlash soon after its release, and fell out of public favour. After the group returned from an unsuccessful tour of the United States, poorly received live performances and the rising popularity of rival band Suede further diminished Blur's status in the UK.
Under threat of being dropped by Food Records, for their next album Blur underwent an image makeover championed by frontman Damon Albarn. The band incorporated influences from traditional British guitar pop groups such as The Kinks and Small Faces, and the resulting sound was melodic and lushly produced, featuring brass, woodwind and backing vocalists. Albarn's lyrics on Modern Life Is Rubbish "uses poignant humour and Ray Davies characterisation to investigate the dreams, traditions and prejudices of suburban England", according to writer David Cavanagh.
Modern Life Is Rubbish was a moderate chart success in the UK; the album peaked at number 15, while the singles taken from the album charted in the Top 30. Applauded by the music press, the album's Anglocentric rhetoric rejuvenated the group's fortunes after their post-Leisure slump. Modern Life Is Rubbish is regarded as one of the defining releases of the Britpop scene, and its chart-topping follow-ups—Parklife and The Great Escape—saw Blur emerge as one of Britain's leading pop acts.

User Album Review
When listening to Blur’s exploration and celebration of Englishness set against the perils of modernity and the McDonaldisation of our culture, try as one might it’s impossible not to think of The Kinks as people (amongst others) who’ve not only covered this ground before but made it so much their own. It rather feels as though Blur are trespassing on the property belonging to The Village Green Preservation Society.
“Sunday Sunday” moves methodically down the checklist of quintessential English imagery; Sunday papers, roast lunch, dozing in front of the tele, a walk in the park, old soldiers, a brass band cameo and Songs of Praise. All very English to be sure but all very much done before. More worryingly perhaps, in this tour of Merrie England, the guide has a voice that sounds like Anthony Newley permanently pepped-up on helium.
That said, there’s much to admire; strong grooves (Dave Rowntree’s Mooning about on “Oily Water” is especially effective) and Graham Coxon’s inventive chord work ambushes expectations. Their true metier though is on the likes of “Turn It Up”, an upbeat slice of lightweight but nevertheless joyous pop brimming with nonsense lyrics, neat hooks all coated with a gloopy dollop of blissed-out glee.
Perhaps this was what the record company had in mind after they sent Albarn and co back to the writing room in order to conjure up something for the singles market. What they got was the fairground roustabout of “Chemical World” and “For Tomorrow” which cleverly reworks the exquisitely skewed melody line of “Villa Rosie” whilst scrounging Tony Visconti’s generic string textures, and the thudding motif from “Be My Wife” from Bowie’s Low. A bunch of diamond dog geezers to be sure.
Such associations are not to accuse Blur of plagiarism. After all, pop music has always churned out facsimiles of itself, and in this respect Blur are no better or worse than most of the bands bobbing up and down at the time. Though it didn’t do half as well as 1991’s Leisure, it was the perfect set-up for Parklife.