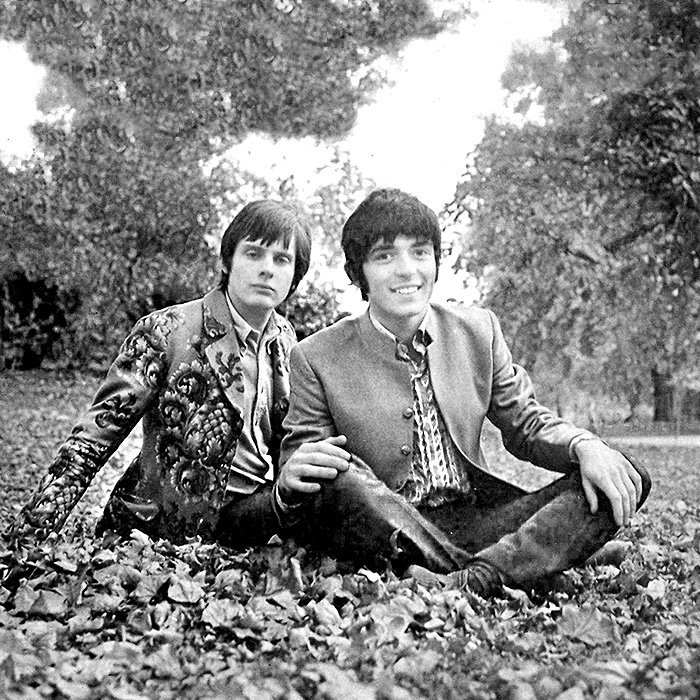 Tony Cox (born November 10 1945 in London) and Douglas MacRae-Brown (born April 17 1947 in Florence Italy) met during their student days at Imperial College in London, where their interest in music led to playing guitars and singing together. The pair began writing songs and after producing a considerable collection of material, decided to attempt to find a music publisher in Demark Street. One publisher they met, Ian Ralfini, head of Robbins Music Publishing, signed the duo to a publishing deal as songwriters as well as securing them a contract with EMI as recording artists. Ralfini determined it would be best to market the duo as a group. Tony recalls: "We had written these songs and suddenly this guy Ian Ralfini was asking us if we just wanted to be songwriters or did we want to make records, and we said 'Oh yeah, we'll make records.' We were having a meeting in his office and he said, 'Well, it's a bit boring to be called Doug and Tony,' and we agreed. He said, 'I was thinking it could be Young Britain or Young England or something,' and I said - with no enthusiasm at all, just for the sake of saying something - 'Well, what about The Young Idea,' and to my eternal sadness he said, 'Yeah that's great!' So that's what we were."
EMI were impressed with the duo's song writing abilities and this resulted in their first release on Columbia being a combination of self composed songs for both sides of the single. The 45 received little airplay or record sales. In an attempt to improve the hit potential, the Mike Leander/Gordon Mills composition "Gotta Get Out of the Mess I'm In", was chosen for the follow-up. This single again fared poorly and failed to enter the chart. Their third release was a cover of "Peculiar Situation" from The Hollies' "For Certain Because..." album. The single was released at the same time that The Young Idea began gigging as part of a package tour that included locations such as Mansfield, Newcastle, Glasgow and Doncaster with headlining acts The Hollies, Paul Jones, The Spencer Davis Group and The Tremeloes. Tony Cox remembers the experience: "I loved that tour. It was one of the last of the old-style one nighter tours that went out - five acts on the bill, two shows a night - across the country. It was fantastic fun. We would play maybe four songs to open the show and that was our work over. Then, being such fans ourselves, we would go out front and watch the show, running the gauntlet of the stage door fans and avoiding getting the clothes torn off our backs which was, surprisingly, a real danger at the time."
"Peculiar Situation" was another chart failure but EMI persisted with a fourth single, a cover of The Beatles' "With a Little Help from My Friends". Competing with a simultaneously released version by Joe Brown 7N 17339 (UK No. 32) on Pye records, The Young Idea managed to peak at No.10 in the UK with the song. The flip side, "Colours of Darkness", a self-composition with an East Indian sound, had actually been recorded in 1966 during their second EMI session. This was followed by the song "Saturday Night People" that was written arranged and performed by The Young Idea but issued on Pye under the pseudonym Scott Henderson. "Saturday Night People" was also covered by Christopher Caine for a Decca single but neither the Scott Henderson nor the Christopher Caine version charted.
The "Mr. Lovin' Luggage Man" single was written by proverbial hit-makers Les Reed and Barry Mason but it failed to make any impact on the chart. Realizing that time was running out for the popularity of The Young Idea, EMI threw together an album, "With a Little Help from My Friends", released on the budget Music For Pleasure label as MFP 1225, with eight of the twelve tracks already having been featured on their singles. The remaining four tracks had been recorded in 1966 and 1967 as potential singles resulting in the entire album appearing dated upon its release in 1968. Because of its budget price, the album sold reasonably well but time had run out for the duo and they broke up at this point.
Tony Cox stated that the pair were writing decent songs, but their producer, Tony Palmer, would rarely consider including them for single release. Being forced to record "Mr. Lovin' Luggage Man" was one of the things that forced them to call an end to their recording career. "It was in fact Doug who had the courage to say I want out and it was the right decision", Tony recalls. "We'd also got a bit sick of each other, to be honest. We had been traveling around the north of England in a very small car for two years and we were getting a bit tired of it. I think I'd always known that I was not really a performer and other possibilities were opening up for me as an arranger."
The demise of The Young Idea brought about the end of Douglas MacRae-Brown's recording career, but Tony Cox became a highly respected arranger and producer for such acts as Caravan, Trees, Magna Carta and Family. In 1978, Tony married singer/songwriter Lesley Duncan while they were residing in Cornwall. They later moved to Oxfordshire and in 1996 to Mull, in the Inner Hebrides. Lesley passed away March 12 2010 aged 66 of cerebro-vascular disease.