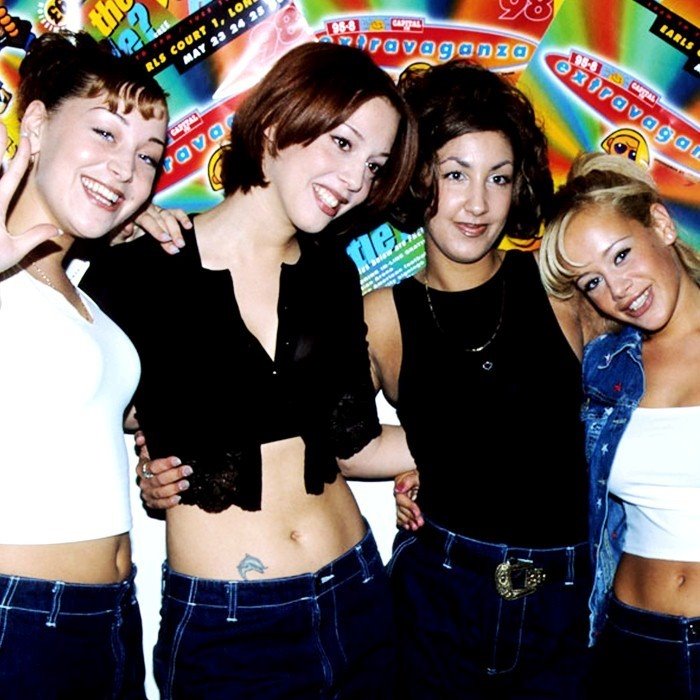 The band members consisted of sisters Frances Potter (born 17 October 1974, London) and Alison Potter (born 29 January 1980, London) plus two friends Alida Swart (born 1975) and Sharon Selby. They released just two singles for EMI in the late 1990s.
The first single was "No Way No Way", released on 15 December 1997, based on Piero Umiliani's "Mah Nà Mah Nà". The song peaked at number 14 in the UK Singles Chart, number 24 in New Zealand.It was later featured on several compilations including Now That's What I Call Music!'s thirty-ninth issue and Dancemania's eighth issue both released in 1998. The accompanying music video was filmed at Brockwell Lido in Brixton, South London. The clip won the dubious title of the "Worst Music Video Ever" on the 1997 ITV Chart Show end-of-year special and was voted number 26 on Channel 4's "100 Worst Pop Records". The follow-up was "True to Us", released on 6 April 1998, which rose to number 36 on the UK Top 40.
Although initially mocked on Channel 4's morning programme The Big Breakfast, the group regularly took part in the show's "Vanilla's Thrillers" feature, including making a return for Johnny & Denise's final week hosting the show.
While promoting their 2 singles with EMI, Vanilla made various appearances in the media, including a performance of "No Way, No Way" on Top of the Pops, performing a spoof version of "True to Us" on Blue Peter with Mabel the Blue Peter dog & a feature on Men & Motors. They would also embark on a tour of schools around the UK, as well as being a minor act on the 1998 Disney Channel UK tour. Vanilla would utilize a Mr Whippy ice cream van as a tour bus, handing out ice cream cones post performance. It was reported in Smash Hits magazine that the band's ice cream van had experienced a minor crash while on tour.
After only two years, record label EMI released the group from their contract. A cover version of Bananarama hit "Love In the First Degree" was rumored to have been recorded by Vanilla for their third single, in the event that their EMI contract was extended.
Despite their contract with EMI being terminated, Vanilla continued to record & perform for several years thereafter. Including various appearances at London's PopShow Party events, were they performed a cover of "These Boots Are Made For Walkin'", which they had intended to release as a single, with new member "Ashley". The girls won a public vote on PopShow Party's website to have one of their original tracks available to stream. The track that was chosen was "Realise", produced by The Next Room Productions, whom Vanilla had previously worked with on the original versions of "No Way, No Way" & "True to Us".
In 2003 according to a now defunct Vanilla website, members Alison & Sharon were to continue as a duo performing under the name Vanilla. While Frances formed a new performance group called Northbound.
In 2011, Frances appeared on the identity parade segment in Episode #25.8 of "Nevermind the Buzzcocks", hosted by James Blunt. It was indicated that Frances was working on a dance track with "TNR productions".
In 2014 Alida was interviewed for an article in The Guardian about the pitfalls of having a hit novelty record.