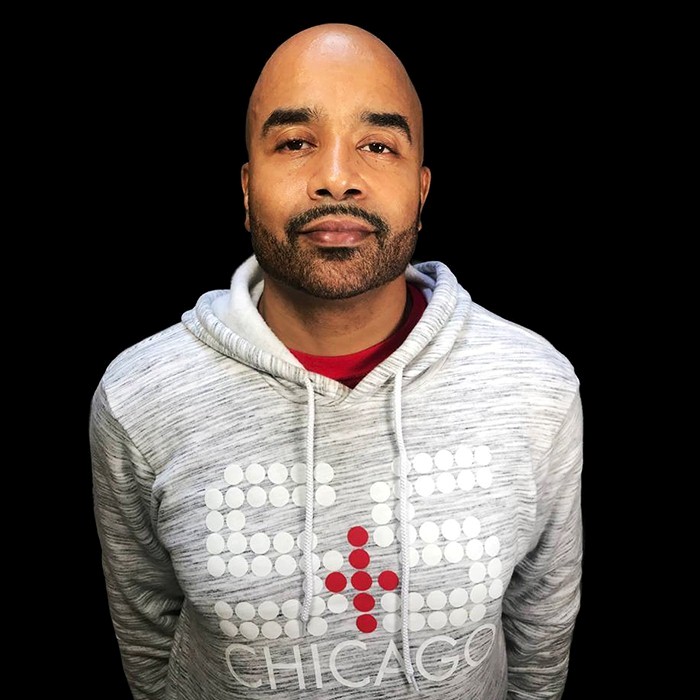 Steve W. "Silk" Hurley (born November 9, 1962) is an American club DJ, pioneering house-music producer, songwriter, and four time Grammy Award-nominee. Two times as Remixer of the Year, Non-Classical (in 1999 and 2000), respectively twice for Best Remixed Recording, Non-Classical (in 2002 and 2003).
From 1985 to 1988, he scored four top 10 singles on the US Dance chart, including the number one hit "I Can't Turn Around", all released in collaboration with Keith Nunnally as J.M. Silk. With "Jack Your Body" (number 25 on the U.S. Billboard Hot Dance Music/Club Play), he topped the UK Singles Chart in January 1987 as a solo artist, while one of his later compositions, "Work it Out" from 1989, brought him his fifth top 10 record on US Dance (at number three). To date, Hurley's last charting single "The Word Is Love (Say The Word)", also known as "Silk's Anthem of Life" by The Voices of Life, peaked in 1997 at number 26 in the UK.
Hurley studied engineering at Robert Lindblom Math & Science Academy (originally named Lindblom Technical High School) in Chicago, Illinois, and later at junior college but dropped out by 1981 to concentrate on his music career full-time.
Hurley gained worldwide fame as a DJ on the Saturday Night Live Ain't No Jive Dance Party on WBMX in Chicago in the mid 1980s. Hurley's mixing style is different than the usual radio–nightclub DJ who plays house music (such as Tony Humphries on WRKS in the early 1990s), since his style of club mixing incorporates advanced DJ tricks only done by hip hop DJs or turntablists such as scratching, cutting, drop outs, back spins, and beat juggling. He released songs under the stage name of Steve "Silk" Hurley and, with vocalist Keith Nunnally, had many hits on the Hot Dance Music/Club Play chart as J.M. Silk, including "I Can't Turn Around," which hit Number one in 1986.
His song "Jack Your Body" was also a hit on the UK Singles Chart, reaching number one for two weeks in January and February 1987. This was the UK's first house-music chart topper, achieving the number one spot with the distinction of never having been played on BBC Radio 1 other than on chart shows - club exposure alone was enough to guarantee success. However, the track broke the chart rules, since the 12-inch format exceeded the then-current twenty-five-minute time limit. In spite of "Jack Your Body"'s success, Hurley has had no further singles (under his own name) reach the UK Chart, thus condemning him to one-hit wonder status. In 1988, he released an album titled Work it out Compilation on Atlantic Records.
Hurley also worked as a prominent remixer, re-working tracks for the likes of Madonna ("Take a Bow"); Michael Jackson ("Jam", "Remember The Time"); Debbie Gibson ("We Could Be Together"); Jennifer Lopez ("Aint it Funny"); The Pointer Sisters ("Insanity"); Bananarama ("Tripping on Your Love"); Brandy ("What About Us"); En Vogue ("Strange"); CeCe Peniston ("We Got a Love Thang", "Keep On Walkin'", "I'm In The Mood", "Searchin'", "I'm Not Over You", "Nobody Else", "He Loves Me 2" and "My Boo"); Dannii Minogue ("Baby Love"); New Order ("Fine Time"); Taylor Dayne ("I'll Wait"); Diana Ross ("You're Gonna Love It"); Crystal Waters ("Makin' Happy"); Kym Mazelle (“Never In A Million Years”) Prince ("Gett Off"); Black Box ("Fantasy," "I Don't Know Anybody Else"); Lisa Stansfield ("The Real Thing"); and the Party, which was a band composed of five Mickey Mouse Club cast members ("Free"); Simply Red's Something Got Me Started. One of Hurley's notable early remixes was a transformation of Roberta Flack's 1989 song "Uh-Uh, Ooh-Ooh, Look Out (Here It Comes)" that took the soft ballad into the house-music realm by removing all but the vocal from the track and substituting a minimalist set of house-styled percussion tracks.
In addition to remixing songs, Steve "Silk" Hurley has also worked as a record producer. Among the noteworthy dance/pop crossover hits for which Hurley is credited as the producer are Jomanda's "Got a Love for You" (No. 40 Billboard Hot 100 Singles, No. 1 Billboard Dance/Club Play, No. 66 Billboard R&B), Kym Sims' "Too blind To See It" (No. 38 Billboard Hot 100 Singles, No. 5 Billboard Dance/Club Play), Ce Ce Peniston's "We Got a Love Thang" (No. 20 Billboard Billboard Hot 100 Singles, No. 1 Billboard Hot Dance Music/Club Play, No. 38 in US R&B), "Keep On Walkin' (=15 Billboard Hot 100, No.1 on US Dance, No.3 on US R&B), "I'm In The Mood" (No. 32 on Billboard Hot 100, No.1 in US Dance, No.7 on US R&B), ""I'm Not Over You" (No. 41 in Billboard Hot 100, No.2 on US Dance, No.10 in US R&B) and "He Loves Me 2" (No.24 in US Dance), and Clubland featuring Zemya Hamilton's "Hold on Tighter to Love" (No. 79 Billboard Hot 100 Singles, No. 1 Billboard Dance/Club Play).
Hurley was nominated for a Grammy Award as Remixer of the Year, Non-Classical in 1998 and 1999, and for Best Remixed Recording, Non-Classical in 2002 and 2003.
Steve "Silk" Hurley's remixes can be heard on The Tom Joyner Morning Show every Tuesday and Thursday morning during the last half of the second hour of the nationally syndicated morning show which originates from Dallas, Texas from 5 a.m. to 9 a.m. CST. The show is also streamed live and throughout the day on www.blackamericaweb.com.
In 1986, Farley Keith had stunned the Chicago community when he hit the top ten of the UK Singles Chart with "Love Can't Turn Around," recorded as Farley "Jackmaster" Funk. Hurley, however, claimed the track was a blatant theft of one of his own productions, and the two stopped speaking to each other. At that time, Farley Keith shared an apartment with the fellow DJ/producer, who came up with a cover of an Isaac Hayes' disco record, called "I Can't Turn Around", from 1975. Before Hurley could arrange to have the record licensed for overseas distribution, Keith, keeping much of Hurley's instrumental arrangement, dropped the rest of Hayes' original lyric, while Vince Lawrence supplied new words. The final result officially became the first ever Chicago house record to reach the music charts. Ironically, Hurley's version topped the US Dance chart, and the producer later got his satisfaction by trumping Keith's success with "Jack Your Body".