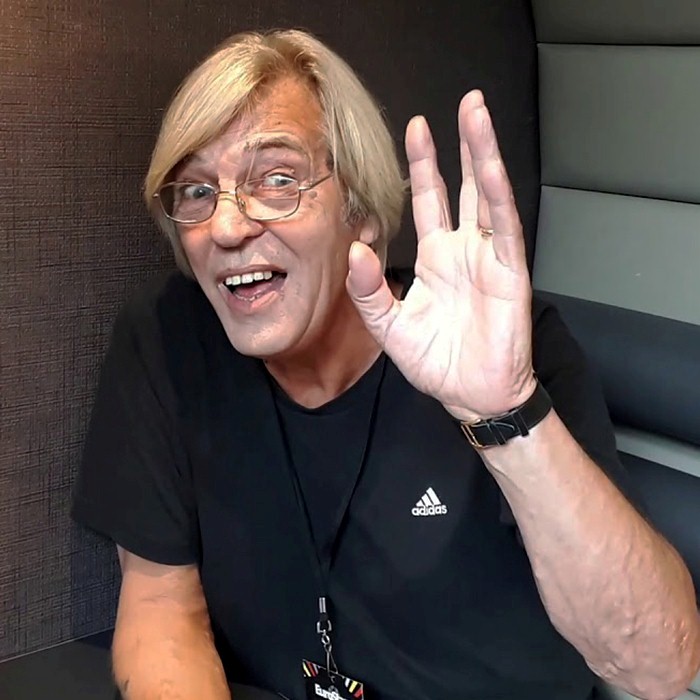 Scott Fitzgerald, (born William McPhail, 28 April 1948) is a Scottish singer and musical actor, who experienced international music chart success in the 1970s and later represented the UK at the 1988 Eurovision Song Contest.
Fitzgerald was born in Glasgow, Scotland, and began his career on the GTO label, releasing the singles "Judy Played The Jukebox" in 1974 and the title track to glam rock movie "Never Too Young To Rock" in 1975, where he featured alongside glam rock acts Mud, The Glitter Band and The Rubettes.
Fitzgerald's greatest success was with "If I Had Words", a duet with Yvonne Keeley and also featuring the St. Thomas More School Choir. The lyrics and arrangement were by Jonathan Hodge, a prolific writer of television jingles and movie themes, who also produced the single. The tune was taken from the main theme of the Maestoso from Saint-Saëns Symphony No.3 in C minor (Symphony with organ) with an added reggae beat. It reached number 3 in the UK Singles Chart in 1978, and later went on to be a hit in Australia, Ireland, New Zealand, Belgium, the Netherlands and Scandinavia, selling more than one million copies.
The song also featured in the score for the 1995 film Babe, sung both by Farmer Hoggett (James Cromwell) and by a trio of mice (a sped-up version of Fitzgerald's original). It was also partially incorporated into the film's suite (instrumental). In 1999, the band Westlife collaborated with the Vard Sisters to record the song.
In 1988, he was the first ever artist chosen by telephone vote to sing the UK's entry in the Eurovision Song Contest with the song "Go". The song was written and composed by Julie Forsyth, daughter of the entertainer Sir Bruce Forsyth. Forsyth joined Fitzgerald on stage at the contest in Dublin, alongside her husband Dominic Grant (also of Guys 'n' Dolls) and Des Dyer (formerly of Jigsaw), to perform backing vocals. Ronnie Hazlehurst conducted the live orchestration. Fitzgerald came second in the contest, by one point, to Switzerland's winning entry performed by Celine Dion. "Go" reached number 52 in the UK Singles Chart in April 1988.
Fitzgerald reunited with Yvonne Keeley in 1992 for the single "United We Stand", which was released on Red Bullet Records. In 2010 Fitzgerald and Keeley reunited for the final time in an all star version of ''If I had words'' for Charity in the Netherlands which featured Gordon, Patricia Paay, Thomas Berge and many others.