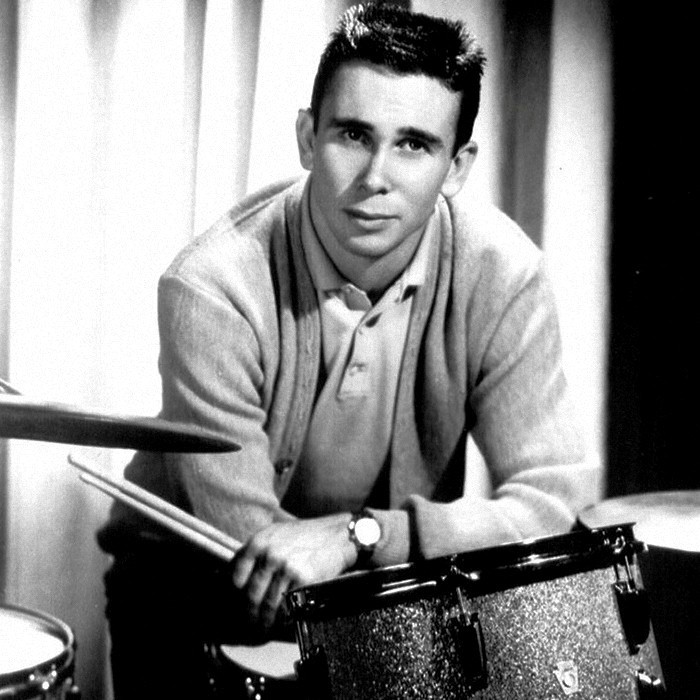 Sander L. Nelson (born December 1, 1938) is an American drummer. Nelson, one of the best-known rock drummers of the early 1960s, had several solo instrumental Top 40 hits and was a session drummer on many other well-known hits, and released over 30 albums. He lives in Boulder City, Nevada, and continues to experiment with music on keyboards and piano.
His first recording, with a band called the Renegades (Richard Podolor, Bruce Johnston, and Nick Venet), was "Geronimo", written by Venet, produced by Kim Fowley, and released on the Original Sound Records label. Although it flopped on the national charts, it charted in some of the Mid West markets. The song, along with "Charge", is part of the soundtrack of 1959 film Ghost of Dragstrip Hollow released by American International Pictures.
Nelson attended high school with Jan Berry, Dean Torrence (who became Jan and Dean), and Kim Fowley. After gaining respect as a session drummer, he played on such songs as "To Know Him Is To Love Him" (Phil Spector's Teddy Bears, 1958), "Alley-Oop" (The Hollywood Argyles, 1960), and "A Thousand Stars" (Kathy Young and the Innocents, 1960).
His song "Teen Beat", on Original Sound Records, rose to number 4 on the Billboard Hot 100 chart in 1959. It sold over one million copies, and was awarded a gold disc. Subsequently, he signed with the Imperial record label, and pounded out two more Top 40 hits, "Let There Be Drums", which went to number 7 on the Billboard Hot 100, and "Drums Are My Beat". In December 1961, the British music magazine, NME, reported that "Let There Be Drums" had gone Top 10 in both the United Kingdom and United States. All three were instrumentals (a feat rarely repeated). Guitar playing on these hits was by co-writer Richard Podolor, later a songwriter and record producer.
Near the end of 1963, Nelson was in a motorcycle accident. The injuries necessitated amputation of his right foot and part of that leg. Nonetheless, Nelson continued to record into the early 1970s, releasing two or three albums a year, consisting of cover versions of popular hits plus a few original compositions.
In September 2008, Nelson and a few friends, recording as Sandy Nelson and the Sin City Termites, released a new record of original compositions, Nelsonized, on the independent Spinout label. Other band members included Eddie Angel (guitarist for Los Straitjackets), Remi Gits, and Billy Favata of Torturing Elvis.