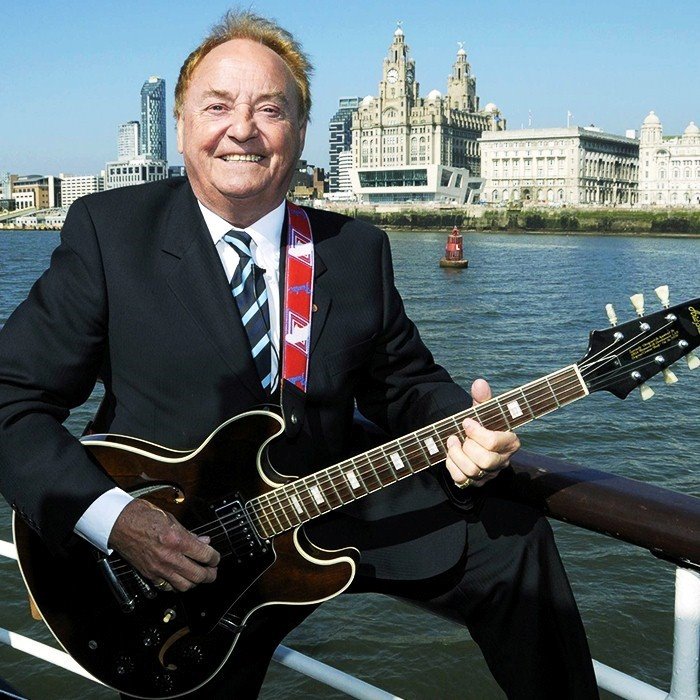 Gerard Marsden MBE (born 24 September 1942) is an English musician and television personality, best known for being leader of the Merseybeat band Gerry and the Pacemakers.
Marsden was born at 8 Menzies Street, Toxteth, Liverpool, to Frederick Marsden and Mary McAlindin. His interest in music began at an early age. He remembers standing on top of an air raid shelter singing "Ragtime Cowboy Joe" and getting a great reception from onlookers.
Gerry and the Pacemakers was the second group signed by Brian Epstein and remained among his favourite artists. Their first single was "How Do You Do It," recommended by George Martin after it was initially given to the Beatles. This was the first number one hit for the Pacemakers. It was recorded at Abbey Road Studios and was released on EMI's Columbia label. Marsden said the recording took four or five takes. The group's second number one was "I Like It", followed by "You'll Never Walk Alone". Other singles included "It's Gonna Be Alright", "I'm the One", "Don't Let the Sun Catch You Crying" and "Ferry Cross the Mersey".
In 1965 Gerry married Pauline Behan and they have two daughters, Yvette and Victoria.
After leaving the Pacemakers—his brother Fred Marsden, Les Maguire and Les Chadwick—Gerry Marsden maintained a low-key career on television, and starred in the West End musical Charlie Girl alongside Derek Nimmo and Anna Neagle.
He is most remembered for the song "I Like It" and his rendition of "You'll Never Walk Alone", which has been adopted as an anthem of several football clubs, the most notable being Liverpool, the club Marsden supports. He sang the song at Wembley Stadium when Everton faced Liverpool at the 1989 F.A. Cup final shortly after the Hillsborough disaster.
Marsden returned to No. 1 in the charts twice during the 1980s with re-recordings of two of his old hits, with all profits going to charity. In 1985 after the Bradford Football Club stadium tragedy in which 56 were killed, he formed a group called "The Crowd", which included other musicians, singers and radio disc jockeys, to produce a new version of "You'll Never Walk Alone." On 18 April 1989, three days after the Hillsborough disaster in which 96 Liverpool F.C. fans ultimately died as a result of their injuries, he joined forces with Paul McCartney, the Christians, Holly Johnson and his production trio Stock, Aitken & Waterman on a new version of "Ferry Cross the Mersey".
In 1993, Marsden published his autobiography, I'll Never Walk Alone, co-written with former Melody Maker editor Ray Coleman. On 15 September 2003, Marsden had triple bypass heart surgery at Broad Green Hospital in Liverpool. He had a second heart operation in 2016, and announced his retirement in November 2018