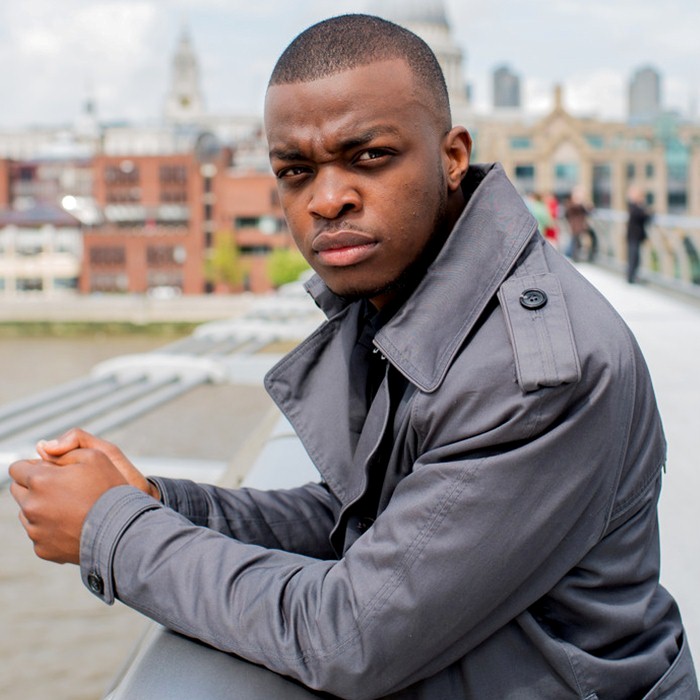 George Mpanga (born 14 January 1991), better known by his stage name George the Poet, is a British spoken-word artist with an interest in social and political issues.
Mpanga was born to Ugandan parents on the St Raphael's Estate in Neasden, north-west London and began performing rap and grime when he was 15 years old. He attended Queen Elizabeth's School, Barnet, an elite selective grammar school, during 2002-2009. He subsequently studied Politics, Psychology and Sociology at King's College, Cambridge (2010-2013), where he decided to adapt his rap output into poetry to communicate more effectively with his audience. Mpanga said, "I think rappers are primarily expected to make money for the industry and provide party soundtracks, but obviously there are exceptions and grey areas. The poet’s 'role' is usually to provide thoughtful social commentary."
During his studies, Mpanga won a social enterprise competition organised by Barclays and Channel 4 called The Stake, which asked entrants how they would spend £100,000. He used his £16,000 prize to fund The Jubilee Line, a series of secondary school poetry workshops for underprivileged children in London. In May 2012, he premiered the piece "My City", about his hometown London. Subsequently, BBC Radio 1 selected him as the face of their Hackney Weekend (in June 2012), and Sky Sports F1 commissioned him to write poems for their coverage of the 2012 Formula One season and the 2013 Monaco Grand Prix. In July 2014, the consumer watchdog group Which? released the track "It's Yours", a collaboration between Mpanga and producer Jakwob, as part of a campaign lobbying the UK Government to improve their response to complaints about public services. "My City" was adapted as a music collaboration with dance producers Bodhi, and released as a single in August 2014. In October 2014, Mpanga released the EP The Chicken and the Egg and the single "1,2,1,2" (once again with Bodhi), describing the former release as "about premature parenthood. Through the story of a rocky relationship, it outlines the cycle of fatherlessness in seven tracks.” Vice magazine wrote that the EP "showcases perhaps the tightest lyricism of the year to date".
In November 2014, it was announced that Mpanga had been shortlisted for the Critics' Choice category at the 2015 BRIT Awards. He came fifth in the BBC Sound of 2015 poll. As of late 2014, Mpanga was writing a debut album and working on theatre and film projects. He released the single "Cat D" in February 2015.