Magic Slim and the Teardrops 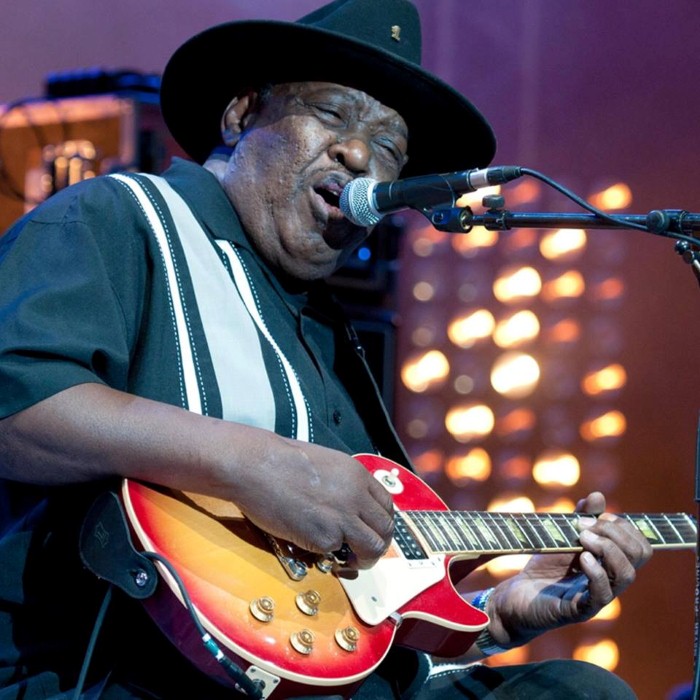 Magic Slim was forced to give up playing the piano when he lost his little finger in a cotton gin mishap. He moved first to nearby Grenada.He first came to Chicago in 1955 with his friend and mentor Magic Sam. The elder Magic (Sam) let the younger Magic (Slim) play bass with his band, and gave him his nickname.

At first Slim was not rated very highly by his peers. He returned to Mississippi to work and got his younger brother Nick interested in playing bass. By 1965 he was back in Chicago and in 1970 Nick joined him in his group, the Teardrops. They played in the dim, smoke-filled juke joints popular in Chicago in the 1970s on band stands barely large enough to hold the band.

Slim's recording career began with the 1966, with the song "Scufflin'", followed by a number of singles into the mid 1970s. He recorded his first album in 1977, Born Under A Bad Sign, for the French MCM label. During the 1980s, Slim released titles on Alligator, Rooster Blues and Wolf Records and won his first W. C. Handy Award. In 1980 he recorded his cover version of Mustang Sally.

In 1982 the guitarist John Primer joined the Teardrops and stayed and played for him for 13 years.

Releases include Spider in My Stew on Wolf Records, and a 1996 Blind Pig release called Scufflin' , which presented the post-Primer line-up with the new addition of guitarist-singer, Jake Dawson.

In 1994 Slim moved to Lincoln, Nebraska, where the Zoo Bar had been booking him for years.

In 2003 Magic Slim and the Teardrops won the W. C. Handy Award as "Blues Band Of The Year" for the sixth time.

Magic Slim and the Teardrops captured a live performance that was released on CD and DVD in August 2005, entitled Anything Can Happen.

Magic Slim was born Morris Holt in Torrence, Mississippi, on August 7, 1937. He took an early interest in music, singing in the church choir, and fashioning a guitar for himself with baling wire from a broom, which he nailed to the wall. "Mama whooped me for that," recalls Slim. His first love was the piano, but having lost the little finger on his right hand in a cotton gin accident he found it difficult to play properly. Undaunted, he simply switched to guitar, working in the cotton fields during the week and playing the blues at house parties on weekends.

Magic Slim is the greatest living proponent of the intense, electrified, Mississippi-to-Chicago blues style that spawned much of the music played by modern blues artists and rockers. It's no wonder that Magic Slim and the Teardrops, considered by many "the last real Chicago blues band," have become one of the busiest and best-loved blues bands around. As Blues Revue wrote, "Whoever the house band in blues heaven may be, even money says they're wearing out Magic Slim albums trying to get that Teardrops sound down cold." Slim's live performances have become legendary. Standing well over six feet, Slim cuts a commanding figure on stage, prowling the boards in his large cowboy hat, filling the room with his slash and burn guitar and booming vocals, commenting on the action throughout, slipping occasionally into a feral, Howlin' Wolf-like voice. Slim has an encyclopedic repertoire of hundreds of blues songs in his head, giving the live shows a charming impromptu quality.

Magic lost his battle after a period of illness on Feb. 20th, 2013. Sadly missed by the blues world and his many fans.