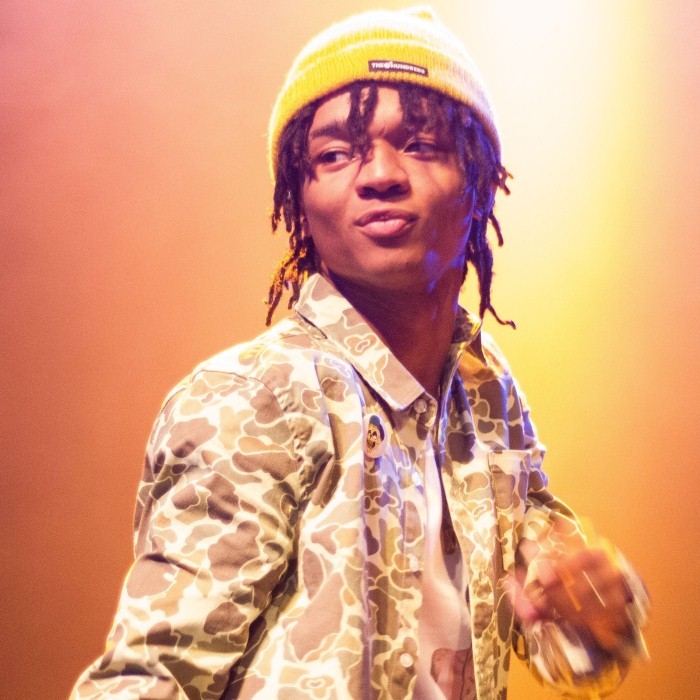 Khalif Malik Ibn Shaman Brown (born June 7, 1995), known professionally as Swae Lee, is an American rapper, singer and songwriter. He is one half of the hip hop duo Rae Sremmurd with his brother Slim Jxmmi. In 2017, he was featured on the single "Unforgettable" by French Montana, which reached the top three on the Billboard Hot 100. His debut studio album, Swaecation was released on May 4, 2018, as a part of a triple album set, which also contained the studio albums SR3MM by Rae Sremmurd, and Jxmtro by Slim Jxmmi. He was later on the single "Sunflower", from the Spider Man: Into the Spider-Verse soundtrack, which has peaked at number one on the Hot 100, becoming his first top-charting single as a solo artist.
Khalif Malik Ibn Shaman Brown was born in Inglewood, California, to a single mother who worked on tanks in the United States Army. Brown was raised in Tupelo, Mississippi, and began to make music in high school with his brother Slim Jxmmi and local rapper Lil Pantz as "Dem Outta St8 Boyz".
After graduating high school, Brown, alongside his brother Slim Jxmmi had a period of homelessness in which they squatted in an abandoned house. In 2013, he and Slim signed to Mike Will Made It's label EarDrummers Entertainment as Rae Sremmurd. They have since released three studio albums under EarDrummers, SremmLife, SremmLife 2, and SR3MM.
In March 2015, Lee was featured on Mike Will Made It's "Drinks on Us", which also featured artists Future and The Weeknd, and became his first single as solo artist. In September 2015, he was featured on Wiz Khalifa's "Burn Slow", which peaked at number 83 on the Billboard Hot 100, making it Lee's first solo entry on the chart.
In April 2017, Lee was featured on French Montana's "Unforgettable". The song peaked at number three on the Billboard Hot 100, making it Lee's first top ten single on the chart as a solo artist. In September 2018 Jhené Aiko featured Brown on her track "Sativa." Two months later, Brown released a song titled "TR666" alongside Trippie Redd.
On May 4, 2018, almost two years after its initial announcement in August 2016, Lee released his debut solo album, Swaecation as a part of a triple album set, which also contained Rae Sremmurd's third studio album, SR3MM and Slim Jxmmi's debut studio album as a solo artist, Jxmtro.
In October 2018, he featured on the song "Close to Me" by Ellie Goulding and Diplo.
On November 3, 2018, Lee featured on Post Malone's song "Sunflower" for Spider-Man: Into the Spider-Verse, which became Malone's third and Lee's first song as a soloist to top the Billboard Hot 100.