Paquito D'Rivera (born June 4, 1948 in Cuba) is a Cuban-born American saxophonist, clarinetist, and composer who plays and composes jazz and classical music.
Early life and education :
Paquito Francisco D'Rivera was born in Havana, Cuba. His father played classical saxophone, entertained his son with Duke Ellington and Benny Goodman records, and he sold musical instruments. He took D'Rivera to clubs like the Tropicana (frequented by his musician friends and customers) and to concert bands and orchestras.
At age five, D'Rivera began saxophone lessons by his father. In 1960 he attended the Havana Conservatory of Music, where he learned saxophone and clarinet and met Chucho Valdés. In 1965, he was a featured soloist with the Cuban National Symphony Orchestra. He and Valdés founded Orchestra Cubana de Musica Moderna and then in 1973 the group Irakere, which fused jazz, rock, classical, and Cuban music.
Defection :
By 1980, D'Rivera had become dissatisfied with the constraints placed on his music in Cuba for many years. In an interview with ReasonTV, D'Rivera recalled that the Cuban communist government described jazz and rock and roll as "imperialist" music that was officially discouraged in the 1960s/70s, and that a meeting with Che Guevara sparked his desire to leave Cuba. In early 1981, while on tour in Spain, he sought asylum with the American Embassy, leaving his wife and child behind, with a promise to bring them out of Cuba.
Upon his arrival in the United States, D'Rivera found great support for him and his family. His mother, Maura, and his sister, Rosario, had left Cuba in 1968 and became US citizens. Maura had worked in the US in the fashion industry for many years, and Rosario had become a respected artist/entrepreneur. He was introduced to the jazz scene at some prestigious clubs and concert halls in New York. He became something of a phenomenon after the release of his first two solo albums, Paquito Blowin' (June 1981) and Mariel (July 1982).
In 2005, D'Rivera wrote a letter criticizing musician Carlos Santana for his decision to wear a T-shirt with the image of Che Guevara on it to the 2005 Academy Awards, citing Guevara's role in the execution of counter-revolutionaries in Cuba, including his own cousin.
Career :
D'Rivera has performed in venues such as Carnegie Hall and played with the National Symphony Orchestra, London Symphony Orchestra, London Philharmonic Orchestra, Florida Philharmonic Orchestra, Bronx Arts Ensemble, Puerto Rico Symphony Orchestra, YOA Orchestra of the Americas, Costa Rica National Symphony, American Youth Philharmonic, and Simón Bolívar Symphony Orchestra.
Throughout his career in the United States, D'Rivera's albums have received reviews from critics and have hit the top of the jazz charts. His albums have shown a progression that demonstrates his extraordinary abilities in bebop, classical and Latin/Caribbean music. D'Rivera's expertise transcends musical genres as he is the only artist to ever have won Grammy Awards in both Classical and Latin Jazz categories.
D'Rivera was a judge for the 5th and 8th annual Independent Music Awards to support independent artists.
Paquito D'Rivera with the Trio Corrente 2015 at the Horizonte world music festival at Ehrenbreitstein Fortress
Paquito D'Rivera Quintet :
The band backing D'Rivera consists of Peruvian bassist Oscar Stagnaro, Argentinean trumpeter Diego Urcola, American drummer Mark Walker, and pianist Alex Brown. As a whole they are named the "Paquito D'Rivera Quintet" and under this name they were awarded the Latin Grammy Award for Best Latin Jazz Album for the album Live at the Blue Note in 2001. 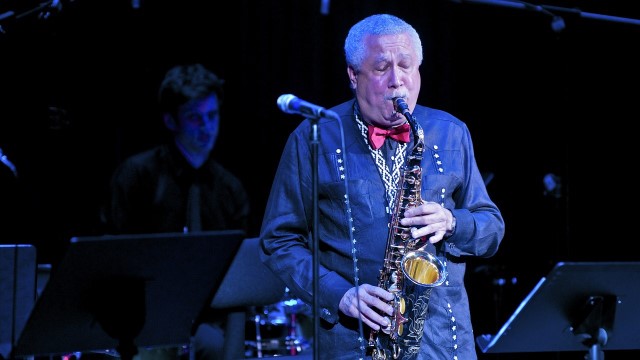