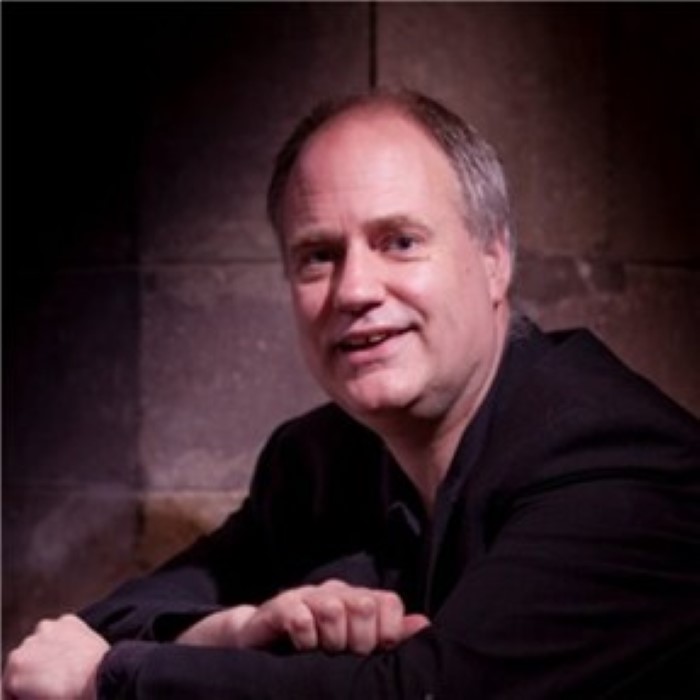 John Butt, OBE, FRSE, FBA (born 17 November 1960, Solihull, England) is an orchestral and choral conductor, organist, harpsichordist and scholar. He is the Gardiner Chair of Music at the University of Glasgow and is music director of the Dunedin Consort.
John Butt was educated at Solihull School on a music scholarship. In 1979 he began his undergraduate education at University of Cambridge, where he held the position of organ scholar at King's College from 1979 to 1982. His organ teachers at Cambridge included Peter Hurford and Gillian Weir. He received his PhD at Cambridge in 1987.
After graduation, he lectured at the University of Aberdeen and was a Fellow of Magdalene College at the University of Cambridge. In 1989, he became university organist and assistant professor of music at the University of California, Berkeley; in 1992, he was promoted to associate professor, as well as director of the University Chamber Chorus. He prepared that choir for Gustav Leonhardt to conduct in Bach's Magnificat and Cantata no. 10 at the 1992 Berkeley Festival and Exhibition; Butt later said that he had come to know Leonhardt "fairly well" and that "I learned a lot when preparing choirs for him back in my California days." In 1997, he gave what one critic calls "memorable readings of Handel Organ Concertos" as guest organ soloist with the San Francisco Symphony Orchestra and Saint Paul Chamber Orchestra.
In autumn of 1997, Butt returned to the University of Cambridge as University Lecturer, Director of Studies for Music at King's College, and Fellow of King's College. He also became the founding director of King's Voices – a mixed chorus "founded in October 1997 under the direction of Dr John Butt (director of studies for Music at King's, 1997–2001) to give the women of King's the opportunity to contribute vocally to the musical life of the College." Musicians that he inspired during this time include the organist Robert Quinney and harpsichordist and director Julian Perkins.
Since October 2001 he has been the Gardiner Chair of Music at the University of Glasgow; he also served as Head of the Music Department from 2001 to 2005.Since 2003 he has conducted the Dunedin Consort (a professional vocal ensemble in Edinburgh, Scotland); his title with the consort as of August 2012 is "Music Director." At the end of the 2013/14 academic session, Butt was also appointed Interim Director of Music of the Glasgow University Chapel Choir, after James Grossmith left that post to become chorus master of the Royal Swedish Opera.
As a guest conductor, Butt has appeared with Philharmonia Baroque Orchestra, the English Concert, the Scottish Chamber Orchestra, the Irish Baroque Orchestra, the Royal Scottish Academy of Music Chamber Orchestra and Chorus, the Orchestra of the Age of Enlightenment, the Aurora Orchestra, the Portland Baroque Orchestra, the Stavanger Symphony Orchestra, the Halle, and orchestras at the Berkeley Early Music Festival and Göttingen International Handel Festival.