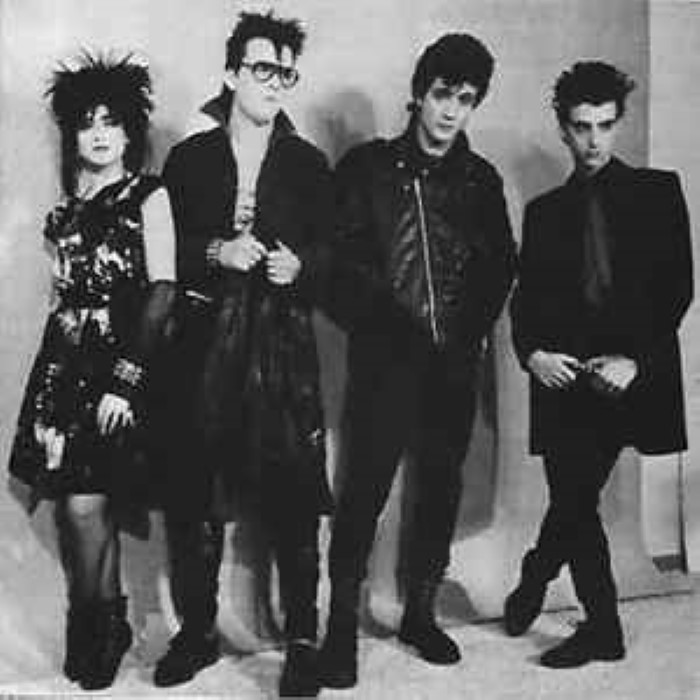 Legendary Madrid band (1980-1983) who are sadly associated with their leader's (Eduardo Benavente) tragic death, Parálisis Permanente (Permanent, or Chronic, Paralysis) was not, properly speaking, a punk band; they were rather involved in the so-called "dark wave" (or Goth -"onda siniestra" in Spain), with a strong influence from Killing Joke, Theatre of Heate, UK Decay and the like; but a lot of their songs are also influenced by the harder and faster UK punk from 1981-1982.

In the beginning they were to be a parallel band to ALASKA Y LOS PEGAMOIDES. The Pegamoides (very successful in Spain) were one of several bands born from KAKA DE LUXE's ashes; three of the Pegamoides came from KK (1977-1979), including the young Olvido Gara a.k.a. "Alaska", who played rhythm guitar in KK but now was the singer. The Pegamoides played ironic pop and their biggest hit was "Bailando" (1982), a funny and catchy disco song inspired on Gibson Brothers' "Cuba"; it was amusing that they played that song all dressed as (postcard) punks!

Pegamoides' bassist, Nacho Canut, had the idea of PARÁLISIS PERMANENTE to get rid of the restrictions of the Pegamoides, forced to play silly pop. Pegamoides' drummer, EDUARDO BENAVENTE, joined as singer and guitarist; the band was complete with Johnny (dr). They began rehearsing in the fall of 1980. They rehearsed with interruptions until the end of 1981, a time when there were lots of "dark" (gothic) bands starting everywhere. With one of them, GABINETE CALIGARI (Caligari's Kabinett, a band that was to be very famous in Spain from 1984 on, but in 1981 their sound was very much like THE CURE's first two LP's), Parálisis Permanente went to the studio in october '81.

The release of Parálisis Permanente and Gabinete Caligari's split EP (Tres Cipreses-Tic Tac), along side AVIADOR DRO's first EP (Aviador Dro was a technopop band with a heavy influence from Devo but a peculiar anarchist-futurist stance), signaled the birth of indie labels in Spain - the two records were released in February, 1982. The names of PP and GC were written in gothic letters in the cover, with a photo of two tombs, and two shaking hands off the graves. (The re-issue from fall of '82, 3c-006, has a different cover, with two "pinheads" from the movie Freaks.)

PP's songs on the EP are Autosuficiencia (Selfsufficiency) and Tengo un pasajero (I Got a Passenger Inside). The first is obviously inspired by the Pistols' God Save the Queen, but with the Clay bands' (GBH, Discharge) blitz. The raving lyrics are based (in Nacho Canut's own words) upon No Feelings and it's a parody, but many people took it straight and thought PP meant it. (A videoclip of the song was made for a TV program called Pista libre.) The other song is an imitation of Killing Joke (e.g. The Wait) and tells a terrific story based on the film Alien.

This record was one of the very first indie hits, and Autosuficiencia was a hymn to many people. Nobody had heard anything as fast and hard in Spain before.

They soon released a follow-up, the EP Quiero ser santa (3C-002, 5/82), "I want to be a (female) saint". In the cover, a naked woman crucified; in the back cover, Eduardo is sitting back, with spread legs, in an armchair (you figure out he's paralytic), with a fear _expression, and a Sid Vicious haircut. (A Parálisis' T-shirt was made using this picture.) Four new tracks: Unidos (United), Yo no (Not Me), Quiero ser santa and Un día en Texas (Some Day in Texas). The last one sounds like GBH (except for the vocals); the lyrics are about the same movie as in Ramones' Chainsaw Massacre. The other ones have a more gothic sound. The title track has a good riff and an intro with Burgos' cathedral's bells; the words were written by Alaska and Ana Pegamoide, and it's a piss-off on the aspiring mythical nuns. "When I die, I want my body to stay uncorrupted / so that everyone who sees me gets scared to death!" (it's funnier in Spanish, eh?). Unidos, a faster song, tells a grim story of some inseparable siamese brothers. Yo no's lyrics are antisocial punk, but they are witty: "There are pigs, there are rats who live in houses; there are seals, there are monkeys who get fed with anything. There's big worms who have legs and hands. There are ravens and parrots who study anything. // Pigs don't think, they have no defences. Rats don't sleep, they can't, they're not able. / Parrots take heed, they repeat, they learn. Ravens do stare but never get close. / And I'm sick of it, sick of it... / Not me, not me, not me..."

The band is one of the favourite new indie bands; both the gothic followers and the punks like them. Meanwhile, ALASKA Y LOS PEGAMOIDES were having their biggest hits. Eduardo wanted more time for Parálisis, but Nacho didn't, so he left. He's replaced by Rafa Balsameda (from NEGATIVO, a pioneer punk band in Donosti, Euzkadi); Ana "Pegamoide" Curra (keyboards) joins in, but only as a collaborator (she was forced by a contract to the Pegamoides), and she writes new songs along with Eduardo. This line-up recorded the LP El acto in July and released it in October '82 (3C-003). A big indie success, and a very big one, just before SINIESTRO TOTAL's LP.

The LP is a manual to perversity and mauvais sex. ("El acto" means the the act of sexual intercourse.) In particular, Ana and Eduardo's songs: Adictos a la lujuria ("Addicted to lust"), Te gustará ("You'll enjoy it"), Tengo un precio (soy barata) ("I've got a price - I'm cheap"), Esa extraña sonrisa (That strange smile) and the instrumental, Bacanal. Other songs: Jugando a las cartas ("Playing Cards" - gambling in a graveyard), Esto no es (nada divertido) ("This is Not (Funny at All)" - a tale of poisoning), a new recording of Tengo un pasajero, another anti-social burst by Nacho called Todo el mundo ("Everybody") and two good covers of the grandfathers: Iggy (Quiero ser tu perro, I Wanna be Your Dog) and Bowie (Heroes). My favourite song (I mean the music, not the lyrics) is Vamos a jugar ("Let's Go Playing"), extremely simple but incredibly effective, Eduardo insisting on a single note of the guitar combined with three hits on the cymbal. On the cover, pictures of Eduardo and Ana (with a blonde dyed long hair à la Siouxsie), dressed up in S&M leather, some candles, a cross (the T of 'Acto'); Eduardo wears a beatnik cap (like the one used by Dylan or Lennon in '65), the cap turned out very fashionable between the Spanish wave-followers.

Around this time, Ana and Eduardo had the idea of a parallel band of the parallel band, called SERES VACÍOS (Voidoids!) and with Ana as singer. They recorded two songs in november, released as a 12" single: Los celos se apoderan de mí / La casa de la imperfección (3C-007, 1983). The flip is a variation on a Banshees' theme (Happy House), but Jealousy's Got a Hold On Me has inner life.

In the winter of 82-83 Eduardo is called for Military Service. Meanwhile, the Pegamoides call it quits. Alaska, Nacho and Toti (the drummer) join to Carlos García-Berlanga's project DINARAMA (so that Dinarama are almost the same people as Pegamoides, without Ana and Eduardo). Eduardo managed to combine the "permisos" (spare days out from the military quarters) with some gigs and recording sessions, as well as some TV broadcasts (Caja de ritmos, the same program as the Vulpess' infamous appearance). In March '83, they recorded a new single and played in Barcelona's old Zeleste (a small club where many new-wave gigs took place from 1983 on, and a few punk gigs too); Eduardo gave his last interview there. A couple of months later, on May 14th , when going back to Madrid from a gig in León, they had a carcrash - Ana and Toti were wounded, but Eduardo died. A promise ended up and the legend began.

Soon after, the single was released: Nacidos para dominar / Sangre (3C-010, 1983). Marlene Dietrich on the cover. Sangre (Blood) was another Killing Joke revisited song, but Nacidos para dominar (Born to Overpower) perhaps was the better and more original song they had ever made. A very strong intro, melody, nerve... an almost perfect song - its lyrics dedicated to the frightening powers which control the world: "They are amazing, they say they're not right. / Badly cooked-up, raw beings who were ill-born. / You have to cover them up with a veil to avoid their smelly stink, / they have to hide to avoid scaring people. / They carry a thousand snakes inside, and a lethal viper that at the first chance could be awakened up... But they have the world in their hand - they are born to overpower. Born, born, born to overpower. Born... to glory!" (Again, it sound better in Spanish. Not unusual, though.)

Some months after the demise, Ana Curra had the courage to raise up the band, but the name changed to SERES VACÍOS. They evolved starting where P.P. had ended up, and with the novelty of the female voice. The critics accused S.V. of being P.P.-lookalikes, but I think their 12" Luna nueva (3C-101, 11/83), at least the title track, was a step ahead. Other records followed (12" EP Recuerda, 1984; LP Volviendo a las andadas 1987; sorry I don't know the rest) but they didn't get the acclaim that they deserved. Incidentally, Ana Curra has helped several punk bands from Madrid.
Read more on Last.fm. 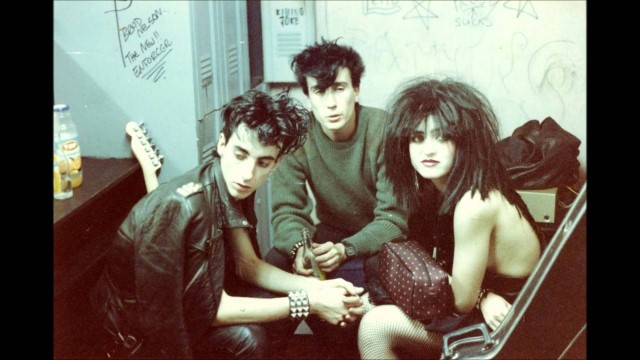