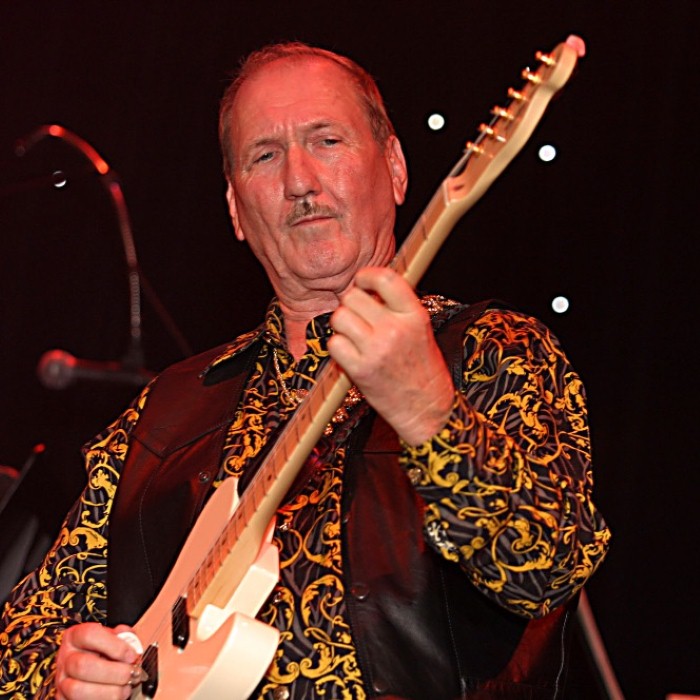 James Burton (born August 21, 1939 in Dubberly, Louisiana) is an American guitarist. A member of the Rock and Roll Hall of Fame since 2001(his induction speech was given by longtime fan Keith Richards), Burton has also been recognized by the Rockabilly Hall of Fame and the Musicians Hall of Fame and Museum. Critic Mark Demming writes that "Burton has a well-deserved reputation as one of the finest guitar pickers in either country or rock ... Burton is one of the best guitar players to ever touch a fretboard."

James Burton is also known as the "Master of the Telecaster."

Self-taught, Burton began playing guitar in childhood. By the time he was thirteen, he was playing semi-professionally. A year later he was hired to be part of the staff band for the popular Louisiana Hayride radio show in Shreveport. While he was still a teenager, Burton left Shreveport for Los Angeles, where he joined Ricky Nelson's band. There, he made numerous recordings as a session musician. Burton created and played the guitar solo on Dale Hawkins 1957 hit song "Susie Q", a record that would become one of the Rock and Roll Hall of Fame's 500 Songs that Shaped Rock and Roll.

With Rick Nelson
Burton played guitar on the majority of Rick Nelson's songs recorded during the first 11 years of Nelson's career, beginning with his premiere at Master Recorders in Hollywood on November 18, 1957, for the classic "Stood Up" / "Waitin' in School" rockabilly single (Note: Burton was relegated to rhythm as Joe Maphis was still playing lead guitar at the time). In 1965 he started working on the television program Shindig! which curtailed his touring with Nelson. However, Burton continued contributing to his friend's studio albums through the Perspective sessions in April 1968.

As a studio musician
The Shindig! exposure led to recording session work with a variety of artists, mostly as an unattributed sideman. In 1967 Burton played Dobro on the Richie Furay song, "A Child's Claim To Fame" on Buffalo Springfield's second album, Buffalo Springfield Again. Due to the volume of work, Burton turned down an offer to join Bob Dylan's first touring band, and another offer to play on Elvis Presley's 1968 comeback TV special Elvis.

With Elvis Presley
In 1969, Presley again asked Burton to join his show in Las Vegas, and, this time, Burton accepted. Burton organized the TCB Band, serving as its leader, and backed Presley from 1969 until Presley's death in 1977. A hallmark of Elvis' live shows during this period was his exhortation, "Play it, James," as a cue for the guitarist's solos. For the first season in Vegas in 1969, Burton played his red standard Telecaster. Shortly thereafter, he purchased the now familiar pink paisley custom Telecaster. Burton was not sure that Elvis would like it; however, since Elvis did, Burton used it for every show.

Since 1998, Burton has played lead guitar in Elvis: The Concert which reunited some of Elvis' former TCB bandmates, background singers and Elvis' orchestral conductor Joe Guercio (mostly from the "concert years" 1969–1977) live on stage.

With John Denver
During 1975 and 1976, while still touring with Presley, Burton was one of the first members to join and tour with Emmylou Harris as part of her backing band, the "Hot Band", after the death of Gram Parsons. He was joined by a cast of talented musicians which included his bandmate with Presley, Glen D. Hardin, and newer musicians which included Rodney Crowell. However, once Presley was ready to return to the road, Burton returned to perform with him, although the others, including Hardin, elected to continue with Harris. Just before Presley died in 1977, Burton was called to play on a John Denver television special. During the taping, Denver asked if Burton would consider going on a European tour. Burton said he was working with Elvis, but if scheduling permitted, he would be glad to go. Shortly after Elvis' death, Burton began a regular collaboration with Denver. The first album they recorded was I Want to Live.

During the sessions, Burton and Denver talked about a band. Glen Hardin and Jerry Scheff, from Presley's band, joined the new band too. Burton remained a member of Denver's band until 1994, but often toured in parallel with other artists including Jerry Lee Lewis. In the 16 years Burton worked with Denver, they recorded 12 albums and toured around the world. While touring with Denver, Burton carried several instruments, including backup Dobros and a spare 1969 Pink Paisley Fender Telecaster he had used as a touring guitarist with Elvis Presley during the 1970s. He rejoined Denver in 1995 for the Wildlife Concert. When Denver died in 1997, Burton spoke at his memorial service in Aspen, Colorado.

Statue of Burton at the Shreveport Municipal Auditorium
Burton's later career included work with Ricky Nelson, Elvis Presley, John Denver, Merle Haggard, Gram Parsons, Rodney Crowell and Emmylou Harris. Beginning with King of America (1986), Burton recorded and toured with Elvis Costello intermittently for about a decade. In 1988, he was a prominent part of the acclaimed Cinemax special, Roy Orbison and Friends, A Black and White Night. In 1990, Burton moved back to his hometown of Shreveport permanently.

In the fall of 2004, Burton recorded Matt Lucas-Back in the Saddle Again, a sequel to the Matt Lucas album The Chicago Sessions. The album features rockabilly and country music, and was released in May 2006 by Ten O Nine Records.

In 2005, Burton started the annual James Burton International Guitar Festival to raise money for his charitable foundation. The festival is held in the Red River District of Shreveport.

In 2007 he was inducted into the Musicians Hall of Fame and Museum in Nashville, TN as a member of the L.A. session player group known as The Wrecking Crew. In 2008, Burton was asked by Brad Paisley to play on his upcoming album Play. Burton went along for the ride and played on an instrumental track called "Cluster Pluck," as did Vince Gill, Steve Wariner, Redd Volkaert, Albert Lee, John Jorgenson, and Brent Mason. At the 51st Grammy Awards in 2009, the song won Best Country Instrumental Performance.

On August 22, 2009, on stage at his James Burton International Guitar Festival, James Burton was inducted into The Louisiana Music Hall of Fame.

On July 15, 2010 Rolling Stone Magazine announced Eric Clapton and James Burton will provide backup guitars on the track "You Can Have Her." for the new Jerry Lee Lewis album Mean Old Man, scheduled for release the fall of 2010.

On June 9, 2012, Burton appeared in Shreveport at the Municipal Auditorium for a presentation of Garrison Keillor's Prairie Home Companion.

Equipment
Burton works with a variety of amplifiers to provide flexibility and a wide range of sounds. He has used a Music Man 210-150, an old Fender Twin with K model Lansing speakers, and a 1964 Fender Deluxe. His primary guitar has always been a Fender Telecaster, beginning with an early blonde model his parents bought for him around 1952. His 1969 Paisley Red (better known as Pink Paisley) Telecaster became the basis for his James Burton Telecaster model in 1991, with Lace Sensor pickups and a TBX tone circuit. Five years later his 1953 Candy Apple Red Telecaster was the inspiration for a standard version Artist Signature model featuring two Fender Texas Special Tele single coil pickups and a vintage-style 6-saddle bridge. In 2006, the Signature Paisley model was redesigned with a red paisley flame design over a black body, plus three specially designed blade pickups, a no-load tone control and S-1 switching system. 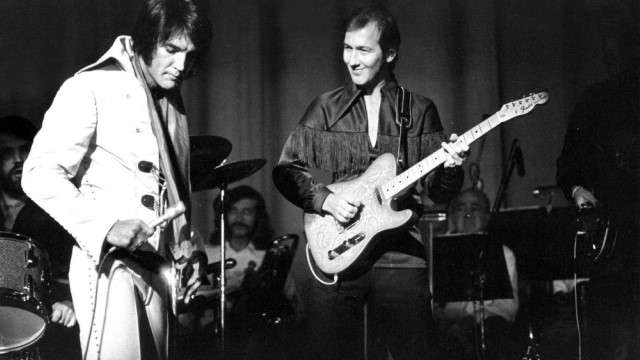