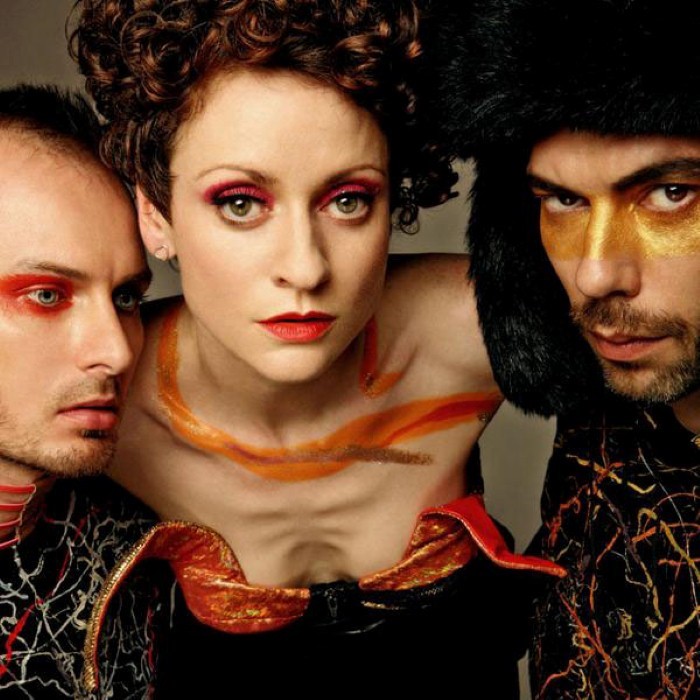 Czech formation Ohm Square was founded by Jan Čechtický with Dušan Lipert and Jan Kleník in 1996, in times of first attempts on electronic dance music field, following their occurance in Prague's indie groups Sebastians, Colorfactory (Dušan, Jan2) a Hyena Family (Jan5). Shortly after recording of a first few tracks, they invited to Prague a singer of a cult house hit 'Petal' from London's Wubble-U, Charlie One. She stayed with Ohm Square and after several years of cooperation on the Prague-London route she moved to Czech Republic permanently. Since 1996 Ohm Square play together in the same formation: Jan2 (Jan Čechtický), Jan5 (Jan Kleník), Dušan Only One (Dušan Lipert) a Charlie One (Charlotte). Ohm Square, dedicated at the time mostly to d'n'b and breakbeat, published their first vinyl single with sings Pillow and Coloured Post in 1996 under their own label, Mr. Cucumber. In 1997 they had a first concert in Prague's Roxy club. At the end of year Ohm Square released a debut album Ohmophonica (Next Era), licensed later by MFS (Paul van Dyk, beside others) in Germany. Choice of their song 'Pillow' on prestigious compilation DJ Kicks (produced by singer Nicolette from Massive Attack) was significant. Readers of Czech magazine Rock & Pop selected Ohmophonica as the record of the year. In summer 1997 they played on tour with british Dubstar, one of a few Ohm Square tours in Czech Republic. Despite being always more of a studio group, Ohm Square opened for Apollo 440 in Brumlovka (Prague). In the first half of 1998 they add a drummer Láďa Pecha (Načeva), and famous czech d'n'b DJ Koogi to their live appearances. In 1998 they play mainly in Holland, Germany, Switzerland, and Czech Republic and slowly start to collect material for a next album. Recording of the second CD Scion was started in their own Prague studio, Eastauthentic, and continued in Wubble-U's London studio Strange Weather. The album was produced by Duncan Forbes from Spooky. After the release of Scion in 1999, Ohm Square gives another european tour, thanks to production company Zjelva Pro Motion. At home they receive Popular Music Academy's Angel award in 1999 and 2000, and listeners of Prague alternative Radio 1 choosed Ohm Square best group of the decade. In 2001 Ohm Square members release remix album under their Eastauthentic label, and start to produce their own songs and projects, such as Dentist, Vindaloo, Eky, eky, eky, eky ta pang (Jan2, Charlie one), Mimoň, Default (Dušan Only One), or Skleník (Jan5). They're not opposed to cooperation with other interprets and produce recordings for Dara Rollins (Jan5), Lenka Dusilová, Chaozz (Dušan Only One), 100°C (Jan2), and others. Charlotte appears as a guest singer on records of czech and international projects (DJ Tráva, Juanita Juarez, Nathan Coles...) and becomes one of the most significant persons on Czech dance scene. Since the very beginning, Ohm Square are film maker's favourites, so only a few of recent movies doesn't feature a composition of theirs (Samotáři, Divoké včely, Děvčátko...). Some movies have even their whole original score (Eliška má ráda divočinu, Anděl exit - Jan2); in some they appear on the screen in person (Šeptej, Knoflíkáři, Anděl exit - Jan2, Tmavomodrý svět - Charlie one).