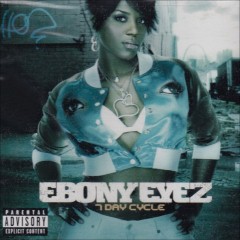 Ebony Eyez was born in St. Louis, Missouri. She began her music career at the age of 9, when she joined a local group. After attending high school at Parkway Central High School, she enrolled into college but dropped out and formed a rap duo with another local female rapper, but the duo didn't last long. Her musical efforts paid off when she came into contact with the TrackBoyz, who were impressed by her lyrical abilities and rhyme flow. In 2004, Ebony made a guest appearance on J-Kwon's debut album Hood Hop and the XXX: State of the Union soundtrack. By the end of the summer of 2005, she had released her first single "In Ya Face", which has become very popular in the clubs but has not yet had success on the charts. On October of 2005, her debut album 7 Day Cycle was released, and she became the first female rap artist of St. Louis to release an album.