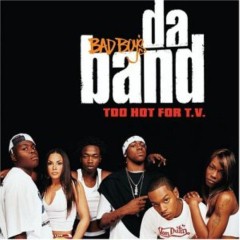 Da Band, known officially as Bad Boy's Da Band, was a hip-hop group consisting of the second season cast of MTV's reality show, Making the Band, created by rap mogul Diddy. The show's prize included the opportunity to be featured on Diddy's label, Bad Boy Records. After weeks of selections and training, Diddy chose the members of Da Band on Making The Band 2. For several weeks the group was subjected to vigorous and sometime demeaning tasks, including walking from midtown Manhattan to Brooklyn to purchase cheesecake for Diddy, and Elliot Ness' battle with Harlem MC Jae Millz. Their debut album, Too Hot for TV, was released in September of 2003. Da Band was widely criticized as fraudulent by most hip hop fans, due partially to the fact that Diddy often embarrassed them throughout the filming of the show. Da Band effectively ended their career on the Season Three finale, when Diddy dissolved the group. However, he still wanted to work with Babs and Ness, calling them hip hop's next "Bonnie and Clyde," (however to date, nothing has been released from either of them). Diddy had also kept Chopper with the label, signing with Bad Boy South. A solo album for him was planned for August. Chopper is currently signd to Cash Money.