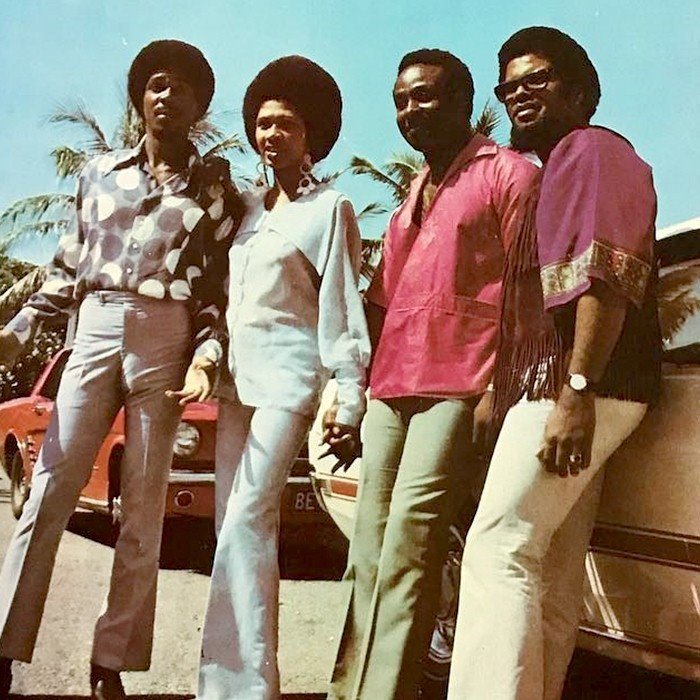 Harry J. All Stars is a reggae band best known as Harry J Allstars. Harry Zephaniah Johnson (known as Harry J, born July 6, 1945, Westmoreland) is a Jamaican reggae record producer of African, Sicilian and Scottish descent. He is the head of the landmark Harry J. Records, located at 10 Roosevelt Avenue, Kingston 6, Jamaica WI. Johnson is an important record producer who met success during the early reggae era, but who's direction still influences the Reggae music industry today Johnson started to play music with the Virtues as a bass player, but soon quit to work as an insurance salesman. He first appeared as a record producer in 1968, when he launched his own record label, "Harry J", by releasing The Beltones' local hit No More Heartaches, considered by many to be the very first reggae song ever recorded, along with the Studio One single "Nanny Goat" by Larry & Alvin. His agreement with Coxsone Dodd allowed him to use Studio One's facilities, where he produced the hit Cuss Cuss with singer Lloyd Robinson, which became one of the most covered riddim in Jamaica. In October 1969, he met success in the UK with The Liquidator (number 9 in the UK Singles Chart) recorded with his sessionband, The Harry J All Stars. This single became one of the anthems of the emerging skinhead youth subculture; together with other instrumental hits released in the UK through his own subdivision "Harry J" on Trojan Records, on a compilation album of the same name (see cover). During the 2008 United States presidential election, president hopeful Senator Barack Obama campaign used the song "I'll Take You There" by the The Staple Singers at the closing of his stump speeches on the campaign trail. The beginning of the song "I'll take you there" features an introduction which was lifted from "The Liquidator". In the beginning of the 1970's he enjoyed another big success with the vocal duo Bob & Marcia with the song Young, Gifted and Black. His productions also included Jamaican hits with DJs like Winston Blake or Scotty among others, and many dub versions. Harry J Studio Johnson is mainly known for his Harry J Studio where Bob Marley & The Wailers recorded the majority of their albums in the 1970s. The studio was also a must stop hangout of many British musicians including the Rolling Stones, The Who, and Grace Jones. In addition, Chris Blackwell the founder of Island Records the original label of the band U2 could be found hanging out in the sound room prior to moving to England in the early 1970s. In 1972, Harry Johnson sold his record shop and set up his own recording studio "Harry J", on 10 Roosevelt Avenue, Uptown Kingston. Harry J Studio soon became one of the most famous Jamaican studios after having recorded several Bob Marley & The Wailers albums from 1973 to 1976 before the Tuff Gong era; such as Rastaman Vibration and Catch A Fire. Johnson's deal with Island Records led him to record artists such as Burning Spear and The Heptones. Throughout the 1970s and the 1980s, backed by former Studio One sound engineer Sylvan Morris, he also recorded artists like Ken Boothe, Augustus Pablo, The Cables and the American pop singer, Johnny Nash, and produced albums by Zap Pow and Sheila Hylton. In 2002, after seven years of inactivity, he reopened his Harry J studio and since has recorded people like Burning Spear. The studio appears in the movie, Rockers