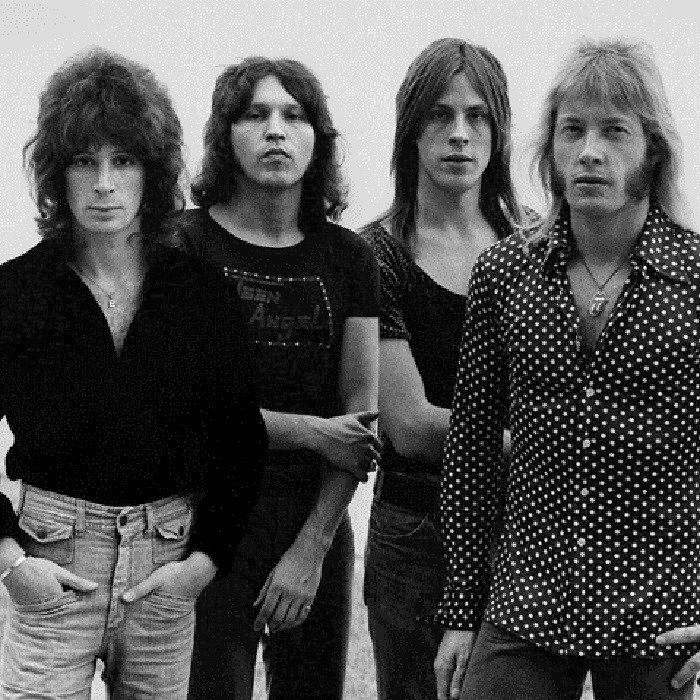 The Raspberries were an American power pop/pop rock band from Cleveland, Ohio. They had a run of success in the early 1970s music scene with their pop sound, which Allmusic later described as featuring "exquisitely crafted melodies and achingly gorgeous harmonies." The members were known for their clean-cut public image, with short-hair and matching suits, which brought them teenybopper attention as well as scorn from some mainstream media outlets as "uncool". The group drew influence from the British Invasion era--especially The Beatles, The Who, The Hollies, and Small Faces--and its mod sensibility. In both the U.S. and the UK, the Raspberries helped pioneer the power pop music style that took off after the group disbanded. They also have a following among professional musicians such as Jack Bruce, Ringo Starr, and Courtney Love.
The group's "classic" lineup consisted of Eric Carmen (vocalist/guitarist/bassist), Wally Bryson (guitarist), Jim Bonfanti (drummer), and Dave Smalley (guitarist/bassist). Their best known songs include "Go All the Way", "Let's Pretend", "I Wanna Be with You", "Tonight", and "Overnight Sensation (Hit Record)". Producer Jimmy Ienner was responsible for all four of the Raspberries' albums in the 1970s. The group broke up in 1975 after a five-year run, and Eric Carmen proceeded to a successful career as a solo artist. Bryson and Smalley resurrected the group's name in 1999 for an album, which included singer/songwriter Scott McCarl working as the vocalist. In 2004 the original four-man lineup reunited and undertook a well-received reunion tour in 2005.

Formation:
The group had its roots in two of Cleveland's most successful local bands in the late 1960s, The Choir and Cyrus Erie. The Choir, originally called The Mods and composed of Dann Klawon, Wally Bryson, Dave Burke, Dave Smalley and Jim Bonfanti, had a more extensive repertoire of original songs. Most notable was "It's Cold Outside" which parlayed its massive local success (#1 in Cleveland) into a nationally-charting single (peaking at No. 68 for Roulette Records). The Choir then went through a series of lineup changes, with Smalley and Bonfanti remaining in the various versions, until 1968, when Dave Smalley was drafted and sent to Vietnam. As a result The Choir disbanded, although it later reformed behind Bonfanti and ultimately survived until 1970.
Although The Choir had the hit and a string of singles, Cyrus Erie, founded by brothers Michael and Bob McBride, became the better-drawing local act shortly after Eric Carmen joined in 1967. Carmen persuaded Bryson, who had recently left The Choir, to join. In live shows, Cyrus Erie mainly covered other artists' songs. When the group signed to Epic Records they recorded two Carmen/Bryson originals ("Get the Message" b/w "Sparrow") as a single. Following this, Bryson quit to return to The Choir, which led to Cyrus Erie disbanding. Carmen and Dann Klawon then formed a new act called The Quick. The Quick recorded a single of two Carmen/Klawon originals for Epic which did not find much success.
The group's style arose from a variety of rock and roll groups that the members loved, especially The Who. Carmen later said:

"Pete Townshend coined the phrase power pop to define what the Who did. For some reason, it didn't stick to the Who, but it did stick to these groups that came out in the `70s that played kind of melodic songs with crunchy guitars and some wild drumming. It just kind of stuck to us like glue, and that was OK with us because the Who were among our highest role models. We absolutely loved the Who." Italics not in original

1970-1972:
After discussions between Carmen and Bonfanti about forming a new group, the first lineup for the Raspberries was Eric Carmen (lead vocals, rhythm guitar, piano), Jim Bonfanti (drums), Wally Bryson (lead vocals, lead guitar) and John Aleksic (bass guitar). Aleksic left the group at the end of 1970. In 1971, Dave Smalley (lead vocals, rhythm guitar), just back from Vietnam, became the fourth member of the original recording lineup with Carmen moving to bass. The Raspberries' demo tape went to the desk of producer Jimmy Ienner, for whom Carmen had previously done session work. After a major-label bidding war the band signed to Capitol Records.
The Raspberries wore matching ensembles on stage. The group was criticized for making its stage entrance in tuxedos and large bouffant hairdos which, according to Carmen, "complemented the style of our music".

1972-1974:
Following the success of "Go All the Way", which peaked at No. 5 in the U.S. in October 1972, sold over one million copies, and was awarded a gold disc, Carmen and Smalley switched instruments, with Carmen moving to rhythm guitar so that he would be upfront on stage, while Smalley took over bass. After two albums, Raspberries and Fresh, both released in 1972, creative tension came to a head sparked largely by Carmen's creative dominance (and commercial success) over the contributions of Bryson and Smalley. Accordingly Side 3 turned out to be a more raw, aggressive effort than its predecessors, typified by the opening track "Tonight". After its release, Smalley was ejected from the band, and Bonfanti departed soon afterwards. They subsequently formed their own band, Dynamite. They were replaced by bassist Scott McCarl and ex-Cyrus Erie drummer Michael McBride for what was to be the fourth and final Raspberries album, Starting Over.

Post-breakup:
The band broke up in April 1975, but their style continued to influence other musicians. Bruce Springsteen praised the Raspberries at several stops during his Summer 2005 tour. Springsteen's drummer Max Weinberg said that he based his drum style in that period off of Raspberries drummer Michael McBride (particularly on the Springsteen album Darkness on the Edge of Town).Paul Stanley of Kiss, Tom Petty, and Axl Rose of Guns n' Roses, have all also cited the Raspberries as an influence in their songwriting.
Singer-guitarist and primary songwriter Eric Carmen went on to have a successful solo career as a singer and writer of romantic pop ballads. His first solo hit "All By Myself" hit No. 2 nationally, and was successfully covered by Celine Dion in 1996. Carmen later had additional Top Ten singles success with "Hungry Eyes" (from Dirty Dancing, 1987) and "Make Me Lose Control". He also wrote "Almost Paradise" (performed by Mike Reno and Ann Wilson for Footloose, 1984), as well as songs that were made major hits by Shaun Cassidy.
In 1999, three of the four Raspberries recorded Raspberries Refreshed, though without Eric Carmen. The album's tracks, written by the three remaining members, attempted to re-create the group's original sound.
In November 2004, the House of Blues nightclub chain opened its Cleveland branch with a Raspberries reunion concert. This led to a well-received 2005 mini-tour starting at the Chicago House of Blues, a VH1 Classic special, and a concert broadcast on XM Satellite Radio. A date from the 2005 tour was recorded, and released in 2007 as "Live on Sunset Strip." The double CD and one DVD contained a foreword from Bruce Springsteen, and a 1970s photo of John Lennon wearing a Raspberries' Just Like Starting Over sweatshirt. Capitalizing on the release, Raspberries played further shows in New York, California, and their hometown of Cleveland.
A biography of the band titled Overnight Sensation - The Story of the Raspberries by Ken Sharp was released in 1993. In 1996, a tribute album to Raspberries called Raspberries Preserved was released by Pravda Records, a Chicago-based indie record label. The album featured 21 cover versions by such acts as The Rubinoos, Bill Lloyd, Brad Jones, Tiny Lights, Rank Strangers, the Gladhands, and The Shambles.
The band's iconic rock tune "Go All the Way" attracted major attention in 2014 when it was notably included in the Marvel cinematic universe film Guardians of the Galaxy. The Albany Democrat-Herald ran a positive review of the film remarking that "while it's freaky to hear the Raspberries'... in space, one recognizes the malleability of its majesty and craft and appreciate the range of vocalist Eric Carmen". The song was included on the film's Guardians of the Galaxy: Awesome Mix Vol. 1 soundtrack released on July 29, 2014. 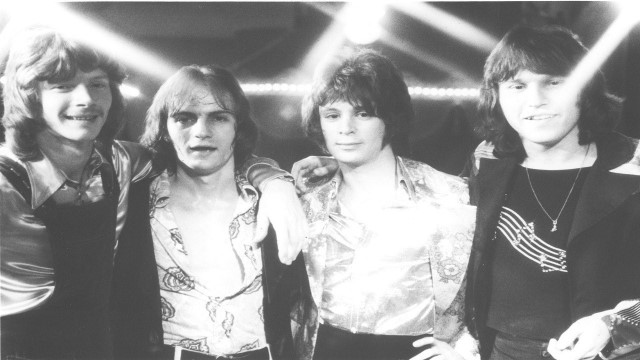