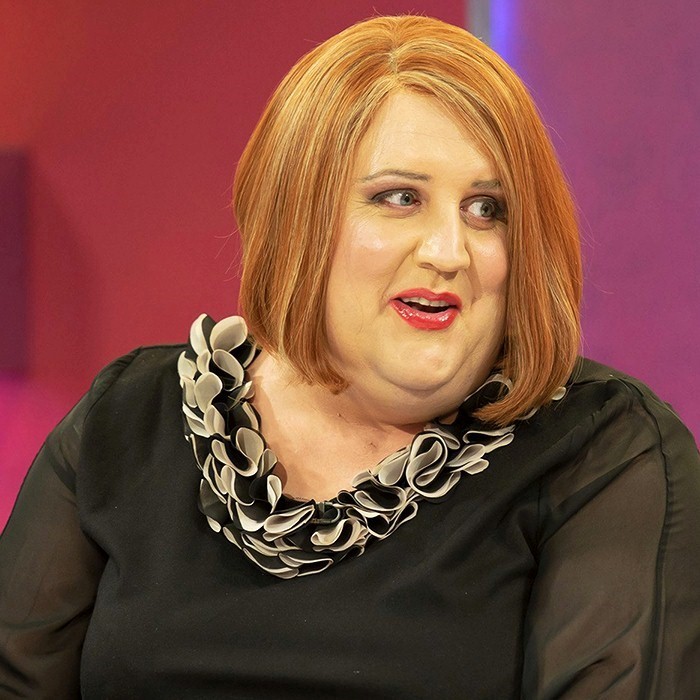 Geraldine McQueen is the fictional singer-songwriter from Britain's Got The Pop Factor... played by Peter Kay as a parody of the generic talent show winner.
Backstory:
She grew up as a male named Gerry King. As an adult, Gerry became a piano player on one of the Northern Irish ferries. Always believing that she was in the wrong body, Geraldine underwent a painful gender reassignment surgery in Bangkok, under the watchful eyes of Dr Fungmewow claiming, "he certainly knew his onions..." Her home life was poor though, as after her mother found a young Gerry cross-dressing, she stated that she didn't want anything to do with her son, saying "she is no son of mine!" However, during the final of Britain's Got The Pop Factor... Geraldine's mother battled with her terminal HIV and inner-dislike for her child and came over to support her. Geraldine's father died when she was younger. The character was killed off in a special Christmas radio broadcast on 96.2 The Revolution, in 2008.
Releases:
The single "The Winner's Song" was written by Peter Kay and Gary Barlow and was released on iTunes and in stores on 13 October 2008. On 19 October 2008, the song entered the UK Singles Chart at number 2. The follow-up single "Once Upon a Christmas Song" was released on 15 December 2008 in stores and became available to download on 14 December. This was a charity single and all proceeds were donated to the NSPCC.
When her Christmas single, "Once Upon a Christmas Song" was released Geraldine made an appearance on GMTV to promote it, claiming it was a serious contender for the Christmas number 1 single.
Other appearances:
After the release of "The Winner's Song", Geraldine made appearances on Take That Comes To Town. She was then seen performing it on The Royal Variety Performance (doing a medley which included "The Winner's Song" and "Once Upon a Christmas Song"), and The Paul O'Grady Show. After nearly 3 years away McQueen went on to Daybreak, Loose Women and The One Show to promote her new single with Susan Boyle.